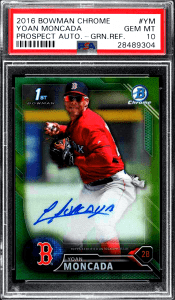 Yoan Moncada has been pegged as a future star since the time he left the Cuban league and was available for MLB teams to pursue.

He eventually signed with the Boston Red Sox in 2015 with a contract that included a reported signing bonus of $31.5 million dollars.

This absolutely demolished the previous high for signing bonuses given to a Cuban player which was $16.5 million to flamethrower Aroldis Chapman a few years prior.

Moncada was touted as a prospect that could do it all as he wowed scouts with the fact that he possessed all five tools and could perform them all at a high level.

Moncada succeeded in baseball from the time he was a teen playing in the Cuban men’s league and his gaudy numbers playing against men while he was still a teenager were what earned him that huge signing bonus.

He was traded from the Boston Red Sox to the Chicago White Sox and now is part of an exciting prospect pool that they have created in Chicago.

However, only time will tell how the group delivers on that potential and if they can have some success in the playoffs. 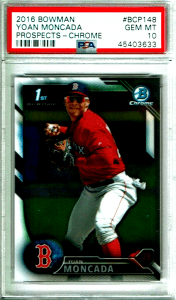 This card features Moncada while he was still on the Red Sox before he was traded and he is pictured winding up, ready to make a throw.

The card features no autograph or jersey patch, but Bowman Chrome is a well-known set and thus this card is one of the more popular base cards.

This is the only card made in 2016 on this list, but that shouldn’t scare collectors.

Just because Moncada may go on to be a superstar in a White Sox jersey doesn’t mean that the cards picturing him in a Red Sox jersey will be worthless.

In fact, it may add a twist of uniqueness that draws in collectors.

Overall, a card with no autograph, jersey patch, or limited run will never be one that rewards investors with that huge jackpot but could be a solid option for more novice collectors. 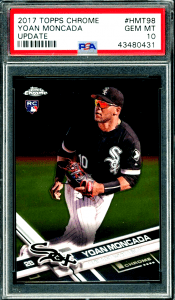 After the Bowman Chrome, we have the Topps Chrome, a similar card but of course produced by baseball card powerhouse Topps.

Topps carries serious brand recognition in the world of baseball cards and Topps Chrome is one of the more popular subsets.

This card does not have an autograph or jersey patch so similar to the Bowman Chrome it’s upside is limited.

One big difference between the two cards is the team that Moncada is pictured with as he was traded in between the production of these two cards.

This card would be great for novice investors who prefer to have Moncada in a White Sox jersey.

If you believe that he will be a part of a successful generation of White Sox teams and become a fan favorite in the city you may be better off going with this card compared to the Bowman alternative. 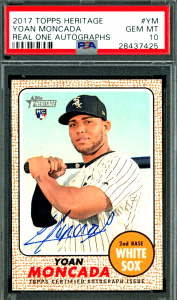 This card is very unique because of the fact that it not only pictures Moncada but also pitcher Carson Fulmer beside him.

Fulmer was a first-round pick and having two young prospects on the card does make this very unique.

If Fulmer can develop into a fan-favorite or a strong contributing player this card should only benefit from it, but of course, Moncada is the main attraction as he is a much stronger player than Fulmer.

This card could be a good investment option because, as mentioned above, Fulmer adds a unique twist that could pay off down the line.

If you believe in the future of the White Sox, then these two players are sure to be contributors and the card should hold strong value.

This one is great for White Sox fans as well as investors alike.

The most expensive Yoan Moncada rookie cards will come in the form of a Bowman Chrome Refractor (i.e. Red Shimmer, Orange).

Moncada has succeeded at every level of baseball he has played and there is no reason as to why he won’t do the same in the major leagues.

He would be a great addition to any collection and his versatile game on the diamond should help him be very valuable to the White Sox in the future.

While a trade early in his career moved him away from one of the most storied franchises in sports, he has a chance to be a part of an exciting young core in Chicago for the White Sox and hopefully helps his new team win their fourth World Series.

The White Sox are LOADED with young players with a TON OF POWER… many experts are predicting them as a sleeper playoff team and we agree.

Moncada had a good year last year and should have even better numbers this year on a very offensive talented White Sox team.

The White Sox are going to score a ton of runs and Moncada may just be the leader of the pack.