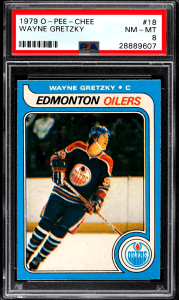 “When the WHA/NHL merger (officially termed an NHL expansion) was finally approved in March, 1979, each WHA team was allowed to claim two players from their WHA roster. Gretzky was the obvious choice of Edmonton, and thus he moved to the NHL without ever being drafted“ – Hockey DB

In every other sport, there is a healthy debate in regards to the best player of all-time… NOT IN HOCKEY.

Wayne Gretzky is the unanimous, undisputed best player of all time in the National Hockey League… end of the story… mic drop.

Having said that picking up a few Wayne Gretzky rookie cards (or memorabilia) for your collection is a no brainer.

Lets go ahead and take a deep dive into the best Wayne Gretzky rookie cards for investment purposes.

The 79 Wayne Gretzky O-Pee-Chee rookie card is one of the most coveted cards in the sports card industry.

The card is numbered 18 and simply reads “Wayne is considered the best prospect to turn professional since Guy Lafleur“.

If you can find the card with anything from a PSA 4 to PSA 10 grade we suggest going all in.

Need to get a card graded? Read PSA vs BGS vs SGC

The Topps version of the card is pretty much the same exact card as the O-Pee-Chee but can be had at a slight discount.

If you can afford both go ahead and get them as their value is similar to a blue-chip stock but greater.

A blue-chip stock will usually return 6 or 7 percent each year while we predict these Wayne Gretzky rookie cards to return anywhere between 15 to 20 percent.

The value to the O-Pee-Chee and Topps Wayne Gretzky rookie cards will range anywhere between $1,000 to $150,000 depending on the grade.

That’s it… they didn’t create dozens of rookie cards back in the day. 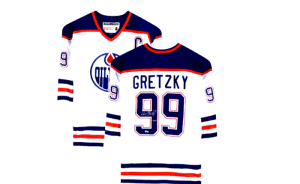 The below-listed memorabilia is your best option when looking for top ROI.

Please note Wayne Gretzky memorabilia will not return as much as the above-named cards but they are still a decent investment option for Gretzky FANBOYS.

If you looking for something a little more exciting try a Connor McDavid rookie card as these cards are somewhat riskier due to the fact he is still playing (but the short term return could be much greater… especially if he wins a cup or three).

We are buying these cards for our clients and personal portfolio. 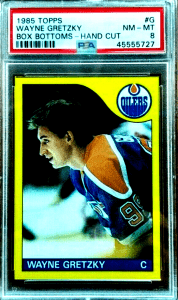 One of the more underrated Gretzky cards… LOVE the yellow border… Gretzky’s face on the card seems to know he is the greatest. 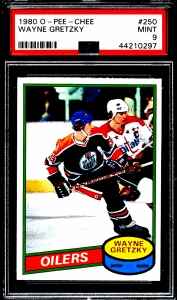 A solid early Gretzky hockey card produced by O-Pee-Chee that will cost under $1,000 (for now)… great buy for mid-level investors. 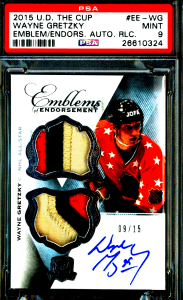 The card has autograph with a game-worn patch… sick card… PLUS it fairly inexpensive… not up for auction often but from what we’ve seen under $1k.

Wayne Gretzky’s rookie card worth will greatly depend on two factors; 1. O-Pee-Chee or Topps and 2. the grade.

Regardless of the manufacturer, the card should cost more than $1,000 at medium to high grades.

If you have a Gretzky rookie card and would like an estimated value please email us photos at value@goldcardauctions.com.

Wayne Gretzky rookie cards are in the blue-chip stock category… they hold their value very well and should have moderate gains year in year out.

If you can’t afford the higher grades don’t be shy buying mid-level grades (i.e PSA 5,6, or 7) as they will also have a good ROI.