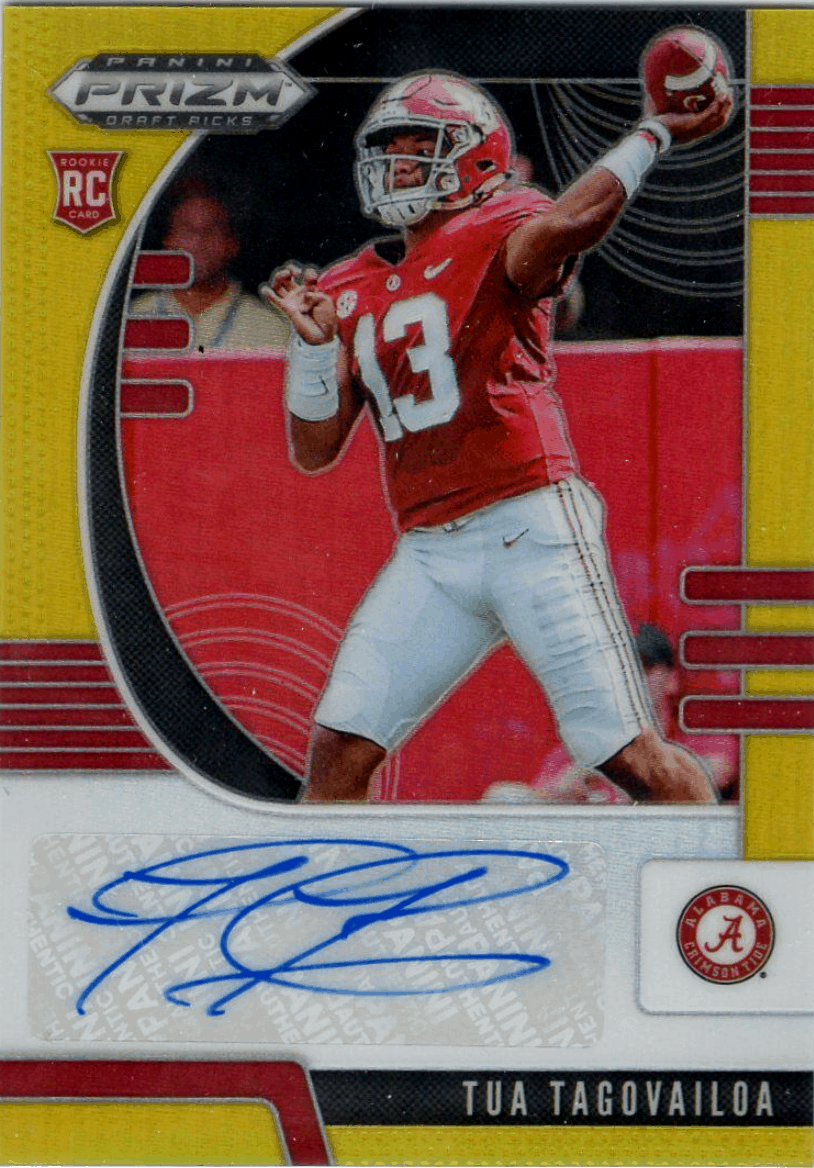 Tua Tagovailoa (3/2/1998) was drafted by the Miami Dolphins with the 5th overall pick in the 2020 NFL Draft out of the University of Alabama. He was the 2nd of 4 Quarterbacks taken in the first round with the others being Joe Burrow (LSU), Justin Herbert (Oregon), and Jalen Hurts (Oklahoma). Honestly, we don’t see much coming in the form of NFL greatness from any of these guys but more on this later.

The Tua Tagovailoa rookie contract was a mind-blowing $30.3 million dollars which was shockingly $5.8 million less than fellow rookie star and number one pick Joe Burrow.

There has been a limited amount of Tua Tagovailoa rookie cards released so far and the better ones will come out later this year. Having said that here are the best Tua rookie cards to date (we will update this write up later once more cards are released). 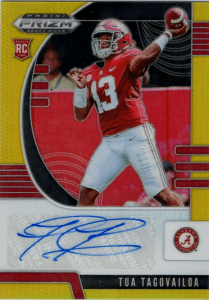 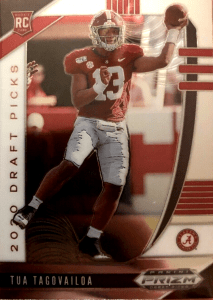 The 2020 Tua Tagovailoa Panini Prizm Draft Picks Autograph Rookie Card is the more popular/expensive of the two and is available in a variety of parallels.

If you have to buy a Tua rookie card now (instead of waiting for the heavy hitters to be released later in the year) the autograph version would be the one to get (the rarer the parallel the better). 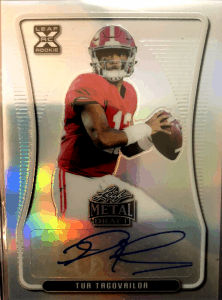 Leaf is making a somewhat desperate attempt to still stay relevant in the football card game by releasing super early rookie cards. These cards don’t draw much interest from us but they do seem to have a semi-cult following as we see them with multiple bids on eBay.

The 2020 Tua Leaf Metal Draft RC is numbered #BA-TT1 and shows Tua dropping back, scanning the field for a wideout or tight end.

The card is available in a variety of parallels.

The value of Tua rookie cards is fairly high considering the main ones have not even been released yet.

If you would like an estimated value on a Tua rookie card please email us a minimum of 2 photos (back and front) to value@goldcardauctions.com and allow up to 72 hours for a response.

As we mentioned earlier we don’t hold out much hope for any of these quarterbacks drafted in the 2020 NFL draft going on to NFL stardom and Tua is not an exception. Again, we could be wrong and hope we are as he seems like a nice enough guy… but nice doesn’t increase the value of your investment portfolio 🙂

If we are wrong we will be the first to admit it and will update our stance… but until we are proven wrong we aren’t buying Tua.