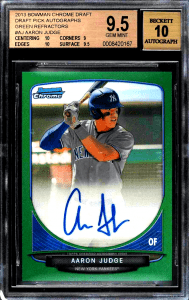 Not only did he win rookie of the year but he finished second in AL MVP voting to Jose Altuve.

Not only should he continue to knock the cover of the ball but the Yankees are in a great position to win a World Series or two over the next few years.

Here are our top 3 Aaron Judge Rookie Cards for your investment dime. 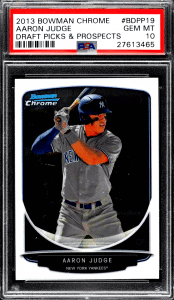 The 2013 Bowman Chrome Aaron Judge rookie card is a great card for investors and is available in a variety of parallels.

#BDPP19 the card shows Judge at the plate with a look that says I’m about to eat this pitcher alive… a great looking card and available in a variety of price ranges due to the numerous parallels as shown below. 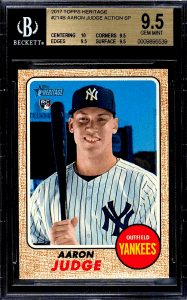 Another Judge rookie card that can be purchased for a moderate amount of coin or a lot of coin depending on the card (i.e. Red Ink Auto PSA 10 will go well into the 4 digits).

Numbered #214 the card shows Judge with a goofy grin on his face with the stick hung over his right shoulder.

A good looking card that will not break the bank at the base level. 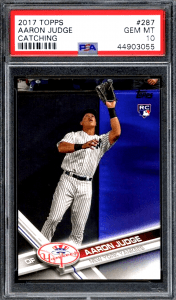 Numbered #287 the card shows Judge jumping up in the air catching the baseball.

Even at a PSA 10 grade, the card will go for under 3 digits. 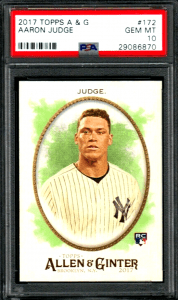 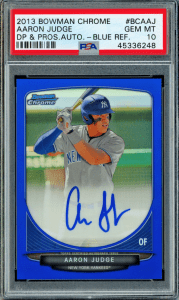 On average the most valuable Aaron Judge rookie cards will be the 2013 Bowman Chrome Draft Picks & Prospects Autograph/Refractor… these cards can easily climb above $10k+ at high grades.

If you would like an estimated value on a Judge rookie card you have in your collection please email us a few photos to value@goldcardauctions.com. 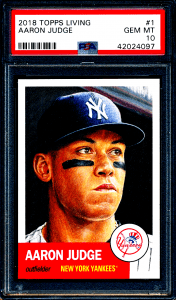 For Yankee fanboys, here are a few non-Aaron Judge rookie cards worth adding to your NY Yankees investment portfolio.

The 2018 Aaron Judge Topps Living Set PSA 10 is our top pick for collectors looking for a great ROI gainer that is a non-Judge rookie card.

“The House That Ruth Built” never had a chance at holding in Aaron Judge… never had, never will, and Judge will continue to destroy pitchers who attempt to accomplish that feat.

On top of the fact that Judge is built like a brick house, the Yankees are in a great position to make a run at the World Series for the next few years (and more).

It would not surprise us to see 3 out of the 4 in the next few years for Aaron Judge… World Series Ring, Homerun Crown, MVP, and or Gold Glove.

Obviously Aaron Judge rookie cards are currently a great investment and should be for the foreseeable future.

If we had to pick one Aaron Judge card? 2013 Bowman Draft Picks and Prospects

More of an NFL FANBOY?