Spencer Torkelson is a BEAST and will be for years to come in the MLB… if you are saying who the hell is this guy… this is going to change really soon starting with the MLB Draft on 6/10/2020… keep reading to discover which Spencer Torkelson rookie cards are worth investing in. 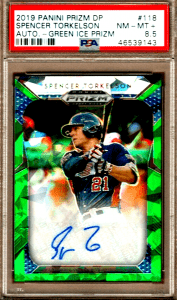 Spencer Torkelson (8/26/1999) played college ball at Arizona State and should be selected by the Detroit Tigers with the 1st pick in the 2020 MLB Draft.

He plays first base, bats right, and stands 6 ft 2… this kid is all about POWER.

Not only can Torkleson unload on the baseball but he should also hit, hit, and HIT with tons of bat speed… so tons of power with a high average… we absolutely love that… he has been compared to a young Mark McGwire.

One of our top picks if you are looking to add some Torkelson to your baseball card investment portfolio. 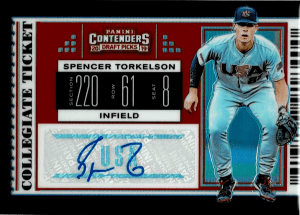 This and the card below are decent buys from Panini. 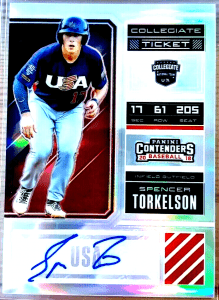 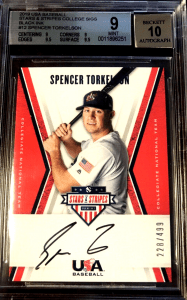 The 2019 Spencer Torkelson Stars and Stripes College Sigs is another favorite as far as his early cards go. 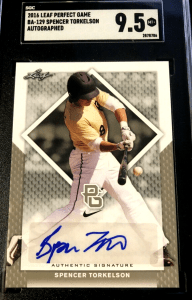 We were really surprised to see a card from 2016 on this list but sure enough, here it is (Spencer is listed as a third baseman on this card).

We will complete this once some of the major brand’s release prospects and rookie cards (were looking at you Bowman). 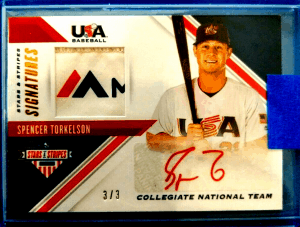 A few concerns include his strikeout rate and he is limited by his speed on the defensive side… first base or DH are his only options there.

With that being said we could easily see this kid putting up a season or three of 50 plus homers and a .300 plus average especially with how juiced the ball is nowadays.