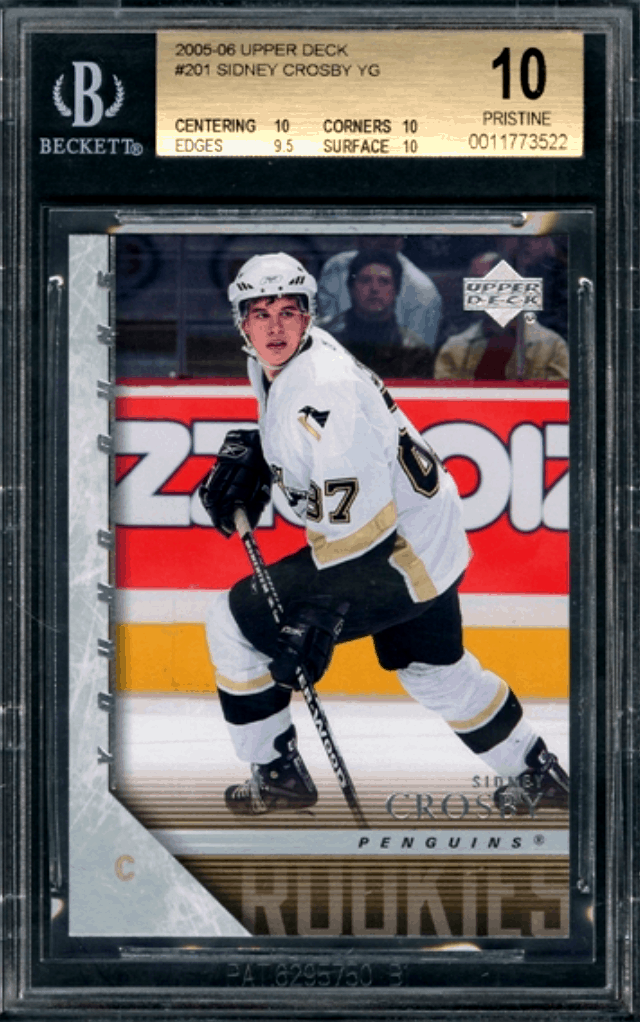 Sidney Crosby (8/7/87) is the rare phenom who has lived up to the high expectations that were placed upon him when he was just a teenager. The Pittsburgh Penguins nabbed him with the 1st overall pick in the 2005 NHL Entry Draft.

From the time he could skate, there was pressure on Crosby to be great and not only did he manage to win three Stanley Cups but he scored “the Golden Goal” which is one of the biggest goals in Canadian hockey history.

Crosby has been the face of the NHL for the last decade and continues to be a star today and since he was so hyped upon arrival to the NHL there are many rookie cards available.

Which ones are the best buys and are they a good investment? Keep reading as we will break it all down. 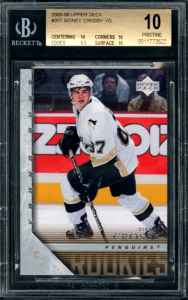 Young Guns has been a favorite for many collectors for a long time as the collection showcases the stars of tomorrow. This version of the Sidney Crosby rookie card is one of the more popular ones and one of the most sought-after cards in any Young Gun collection.

This remains possibly the most widely recognized Crosby rookie card and for that reason, it should be expected to keep its value well. With its intermediate price point, it is a good buy for those that want to take a deeper plunge into the world of Crosby rookie cards.

Like the rest of the Crosby cards, it is a safer long-term investment that should not be expected to have extremely large margins. His accolade filled NHL career is topped off with scoring the biggest goal for a hockey-crazed country ensuring he will always be popular. 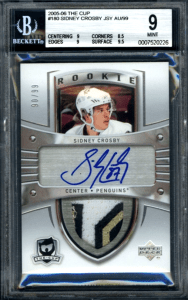 This is one hell of a card!

Continuing the list with another 2005-06 Upper Deck card, this limited card is on the other end of the price spectrum as it is very expensive. The card features both an autograph and a patch of game-worn jersey and is considered to be the holy grail of Crosby rookie cards.

To get an idea for the price, a Beckett graded 9 sold for just over $49,000 in a 2018 auction. This is the most valuable Crosby card and the high sticker price may scare some, but the card has grown in value as Crosby has continued to collect accolades. If Crosby can have a strong end to his career the value should only increase and even if he were to retire today the card could see some jumps around some of Crosby’s post-career achievements such as the Hall of Fame.

If you have the means and are a serious collector of Crosby cards, then this one is the ultimate goal. This is a special card and you are very lucky if you own one of the ninety-nine that was made. 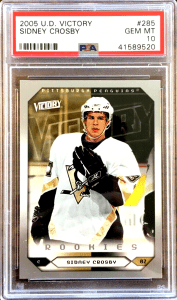 While this card may be on the lower end of the price spectrum for Crosby rookies, you can find copies on eBay for just over $20 ungraded, it would be a great way to enter the investment market for novice collectors or those who do not want to pay the high prices that other Crosby rookie cards could command.

With such a high supply of these cards, it is highly unlikely that the price of these cards will explode or that you will become rich with this investment, but the card could see modest gains as we get further and further away from Crosby’s rookie season.

Crosby is so established that the price on many of these cards is already high.

If you are looking for a card that you may be able to flip in the future for huge profits, Crosby cards may not be your choice as he has already had a career filled with accolades.

On the flip side, you can be assured that Crosby will be a recognizable name forever and your card will always retain value.

Crosby is a safer investment and if that is what you are looking for then he could be your man.

For this reason, Crosby cards are a good investment and should continue to go up in value.

As always email us at value@goldcardauctions.com to get an estimated value of any of your Sidney Crosby rookie cards! 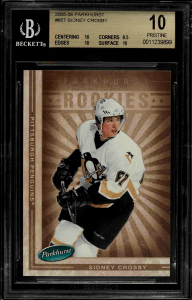 Crosby has consistently been at the top of the NHL jersey sales leaderboard and is not only a fan favorite but a legend of the game.

When Crosby retires it will be sad to see the end of one of the NHL’s best players of all time and considering all this, Crosby cards are in general a good investment.

Crosby rookie cards are, like most, some of the most valuable cards that have been made of him and some are already extremely expensive.

If Crosby can manage to squeeze one more Stanley Cup in his career the values may continue to go up, but he has already established himself as a Hockey Hall of Famer even without it.

Sidney Crosby is an all-time NHL great and a Canadian hero. For those reasons, his cards will always be sought after and hold value no matter what happens in the rest of his playing career.

Crosby will also continue to carry his celebrity status, more so in Canada than the USA, after his playing days are over, making him a good investment as he continues to build on his legacy.

Crosby is a lock for the Hockey Hall of Fame and when that day comes it will lead to a rise in the value of his cards.

A rookie Crosby card is a very safe investment and one that is comparable to any other player who has dominated their sport for a lengthy period of time.

There are many more Crosby rookie cards than just these three that have been listed here and any of them at a reasonable price would be a good buy.

These are not going to be the get-rich-quick cards that you can buy for cheap and flip for a fortune, but instead, you are assured that these cards will never bottom out as Crosby has become a superhero in the hockey world.