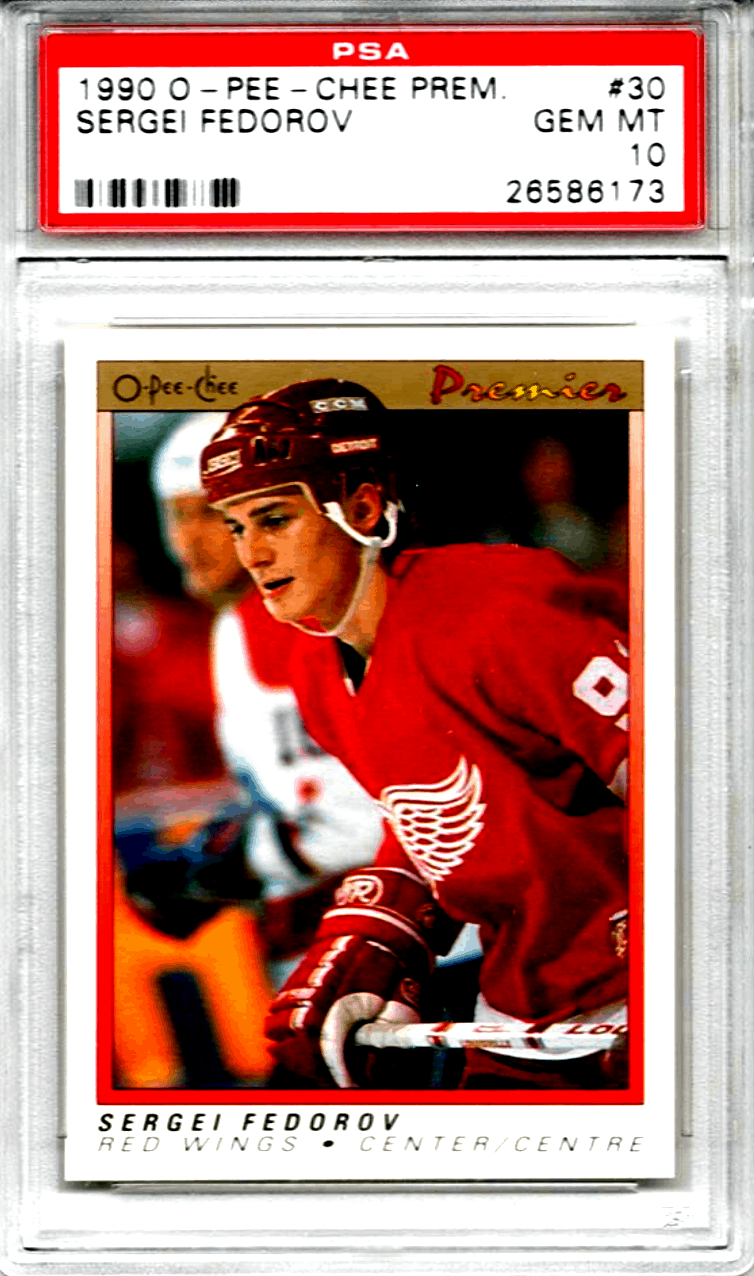 Fedorov immediately made his presence felt as he scored 31 goals to go along with 48 assists (79 points) in his first year in the league.

He also finished second in Rookie of the Year voting placing just behind Ed Belfour (who received 94% of the vote).

Let us take a look at the top Sergei rookie cards for investment purposes! 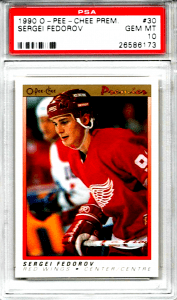 The Fedorov OPC rookie card can be found on eBay auctions pretty regularly at high grades and will not hurt your wallet.

Numbered #30 the 1990 Sergei Fedorov O-Pee-Chee Premier rookie card shows Sergei looking down at the ice as he skates of the ice.

A great low-level Fedorov rookie card option for the collector not looking to spend many coins. 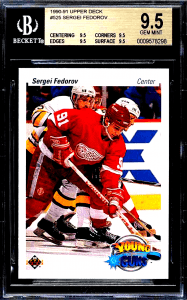 Here is our favorite Fedorov rookie card as we expect his 1990 Young Guns rookie card to have the best ROI out of all of his RCs over the next 10 to 20 years.

Numbered #525 the card show Sergei battling for the puck in front of the net and has the classic Young Guns graphic in the bottom right-hand corner of the card. 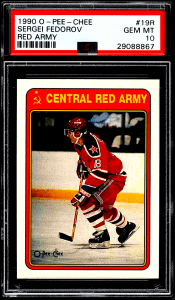 The Central Red Army Fedorov rookie card is the most expensive at super high-grades… at BGS Pristine sold for a jaw-dropping $899 in April of 2020 (the buyer was from Canada).

Numbered #19R the card shows Fedorov skating up ice, head up, looking for the biscuit to come his way so he can rush the net. 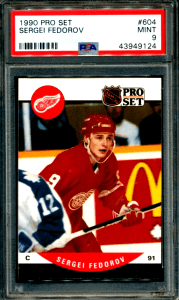 I know what you’re thinking a forth Fedorov rookie card?

How does Sergei Fedorov have a fourth-best rookie card when many players only have 3!

Well it’s simply a testament to how good looking these Fedorov rookie cards are along with a strong Fedorov cult-following (plus it doesn’t hurt that we LOVED collecting hockey cards as a kid).

Numbered #604 the Sergei Fedorov Pro Set rookie card shows him skating up ice, looking for the puck with that classic McDonald’s ad board in the background… this card is burned into our skull as a great childhood memory of ripping packs of pro set.

The card is pretty cheap, even at high grades adding to our love for this card… we might buy a dozen of these over the next year and not even spend $100 🙂

If you would like an estimated value of a Fedorov hockey card please email us at value@goldcardauctions.com.

If you would like a second opinion in order to avoid buyers’ remorse when buying a Fedorov rookie card please email us at advice@goldcarduactions.com.

Sergei Fedorov has a solid cult following and his rookie cards will always retain strong value among them.

On top of that, he is extremely popular in Russia (obvious) and also among Canadians (not so obvious).

The search term “Sergei Fedorov rookie card” in Canada is in the top 10 for all “rookie card” rankings just behind Wayne Gretzky and Eric Lindros rookie cards.

Fedorov rookie cards aren’t going to blow the top of your ROI stats but they definitely won’t hurt it if you’re thinking about adding some Fedorov to your portfolio.

We like the Fedorov Young Guns and the Central Red Army rookie cards for investment purposes.