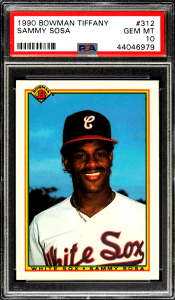 Sammy Sosa (11/12/68) is a retired right fielder who is best known for being one of the hardest hitters in the game during an era marked by the overuse of performance-enhancing drugs (PEDs).

Slammin’ Sammy made his MLB debut on June 16, 1989, with the Texas Rangers. His first career home run came against none other than fellow PED user Roger Clemens.

Sammy Sosa rookie card values were currently in the trash can BUT have been rising as of late… what is behind this rise?… three words… “Long Gone Summer”.

We like the two Sosa Tiffany rookie cards in particular (i.e. Bowman and Topps) to see big gains.

READ NEXT: The best Mark McGwire rookie cards to buy before the “Long Gone Summer” premiers

Long Gone Summer is another ESPN documentary following in the footsteps of “The Last Dance” and we all know what MJ rookie cards did once the Last Dance premiered.. we suspect Mark McGwire and Sammy Sosa rookie cards to do the same.

On a side note, we really enjoyed the MJ “Last Dance” doc and are really looking forward to this “Long Gome Summer” as well… we just hope the doc does a better job of going in chronological order vs the “Last Dance” that was all over the place at times.

We’ve prepared a checklist for his rookie cards, along with three popular options and an investment outlook for the future. 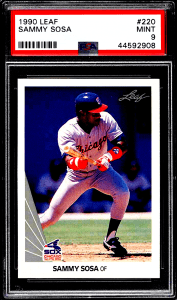 Here is the most popular Sosa rookie card with collectors and can usually be found up on eBay auctions.

The card shows Slamming Sammy laying down a bunt?! You can’t be serious Clark!

Unfortunately yes that is the case. I guess Sammy was more of a speedster in his early years so maybe it makes sense showing him bunting the ball and then we assume he turns on the afterburners and legs out an infield hit ala, Willie Mays Hayes.

Card Info: Numbered #220 the reverse of the card reads “Sammy won the White Sox’ starting rightfield job in spring training of 1990. From the White Sox’ standpoint, he was the key player in the big trade with Texas July 29, 1989, that sent longtime Chisox favorite Harold Baines to the Rangers. In 1988, Sammy led the Florida State League in triples and was fifth in runs at Port Charlotte. Sammy was 16 years old when he signed with Texas in 1985.”

Our Take: This is a great card to buy in order to take advantage of the upcoming Sammy Sosa card price rise (which is already beginning).

ALL ABOARD THE MONEY TRAIN!!! We really like typing that for some reason 🙂

But yes this card is due for a big price increase over the next several weeks due to that doc we spoke about.

The card features Slammin’ Sammy with a big ole’ smile in his face with a gorgeous blue sky backdrop… plus we love the extra-large Bowman card size with the white and yellow border… they literally don’t make em’ like this anymore!

We absolutely are in love with the Tiffany version of this card and might just marry it!

Card Info: Numbered #312 the back of the card simply shows his vital stats along with a pretty cool break down of how Sosa hit vs each team he played against… we also thought those were far more interesting than the cookie-cutter stats page.

Our Take: This and the Topps Tiffany Sammy Sosa rookie cards are going to be the largest ROI gainers due to the “Long Gone Summer” documentary. 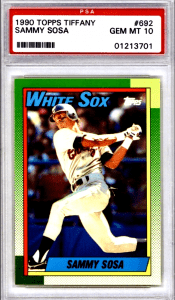 The 1990 Topps is a key card in the set, while there’s also a rarer Tiffany version which is the card we target (if available).

Unlike the others, it has no quote on the back, instead of listing Sosa’s major and minor league batting record.

The O-Pee-Chee release from the same year displays the Topps logo but has a bilingual reverse.

Card Info: Numbered #692 the back of the card simply shows his vitals and stats in the minors.

Our Take: The Tiffany version is our second favorite in regards to Sosa rookie cards but it is hard to find as it’s not listed all that often on eBay auctions. You may see it on eBay buy now but it is usually at ridiculously high asking prices. 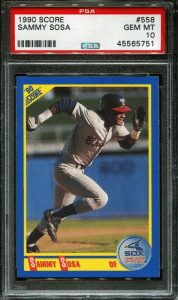 Another solid rookie card, the 1990 Score is numbered #558. A gem mint version recently sold for $26.01, so it’s definitely affordable. The backquote has an extensive breakdown of his early career;

Card Info:  Numbered #558 the back of the card reads “Sammy was one of the most exciting rookies of ‘89. Speedy and aggressive, with a strong, accurate arm, he was at 20 the third-youngest player in the majors. Sammy first showed his wares for the Rangers when he was brought up in mid-June from Double-A Tulsa, where he batted .297. He promptly singled in his first major league at-bat. Sammy’s next stop was Triple-A Vancouver after he was traded to the White Sox organization at the end of July. Pausing just long enough to hit .367 in 13 games, he returned to the majors with the White Sox in late August. This time, Sammy went 3-for-3, with a homer, stolen base and two RBIs, in his debut with the Sox. He seems set for a while”.

Our Take: A good card only if the other ones mentioned above in this write up are not available and you’re looking to buy ASAP.

Slamming Sammy rookie card values are going to see a few months of strong growth due to “Long Gone Summer”.

Once the documentary is over Sosa rookie cards should come back down some but still remain much higher vs previous lows.

Have a few Sammy Sosa rookie cards and would like a value estimate? Please email us a minimum of two photos to value@goldcardauctions.com 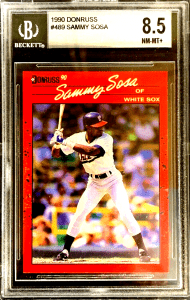 Sosa made it big during the steroid era, and the allegations have affected his rookie card prices in recent times.

His card prices fell accordingly and Sosa went into hiding… we have literally not seen this cat in years.

We wonder if this new doc “Long Gone Summer” will bring him out of the woodwork and possibly help restore his name (at least in the city of Chicago).

In our opinion, a second chance is always a good thing and we feel Sosa should at minimum try to take advantage of the future fame bump ad show up at Wrigley Field a few times this summer and see how things go.

Related: Barry Bonds Rookie Cards are undervalued and you should be buying!

At any rate, his rookie cards should definitely get a good price bump due to the documentary and honestly, all of his cards show get a good bump (even non-rookies).

As we previously stated they should come back down some after the doc is over but still remain higher than previous lows.

Sammy Sosa rookie cards are a solid buy right now and your best option might be to buy now and sell during the airing of the documentary.

We will keep a close eye on Sosa rookie card prices and provide updates when needed.