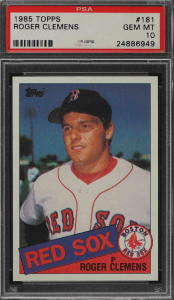 Roger Clemens is one of the best (and most controversial) pitchers in Major League Baseball history. His best weapon was his 98-mile-per-hour fastball. Hence, he earned the nickname “Rocket.”

Clemens was born on 8/4/62 in Dayton, Ohio. He was a three-sport star (baseball, football, and basketball) at Spring Woods High School in Houston, TX. He then attended the University of Texas, helping the Longhorns win the 1983 College World Series.

The Boston Red Sox selected Clemens 19th overall in the 1983 MLB Draft. He spent the first 13 years of his pro career in Boston. During that span, he recorded three seasons with at least 20 wins.

His best year was in 1986, when he went an astonishing 24-4. Thus, Clemens earned the first of his 11 All-Star berths and the first of his seven Cy Young Awards that year. He also won the 1986 American League MVP award.

Clemens also took the mound for the Toronto Blue Jays, New York Yankees, and Houston Astros. He earned both of his World Series rings (1999 and 2000) with the Yankees.

Clemens’ other accolades include the Triple Crown (1997 and 1998), the MLB All-Century Team, and the Boston Red Sox Hall of Fame. 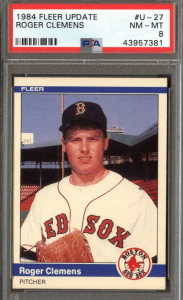 This is far and away the most popular Roger Clemens rookie card on the market. Clemens left the minor leagues for Boston on May 15, 1984. He was one of the players who were included in the 1984 Fleer Update set (which featured players who got the call from the minors that season).

The front of the card shows a young and beaming Clemens in his Red Sox uniform.

The back of the card reads, “Won 3 letters as a football defensive end and 2 more as basketball center at Spring Woods High School (Houston), even had pro offers from Seattle Seahawks and the Boston Celtics…Was Red Sox first pick in 1980 June draft….Was the winning pitcher in the final game of the College World Series ’83, as Texas beat Alabama for the NCAA title….His 1983 pro record including the Eastern League playoffs was 9-2, 1.19 with 66 hits in 98 IP, 13 ER, 14 BB, and 108 strikeouts.” 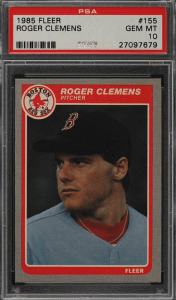 The front of the card features a business-like Clemens staring down the opposing batter. This is a great option for Clemens fans who want to reminisce his unhittable fastballs.

The back of the card reads, “Won roster spot with Red Sox in just second year of pro ball in ’84, winning nine games…Was winning pitcher in the clinching game of College World Series for Texas Longhorns in 1983.”

This is another card which shows a smiling Roger Clemens on the front, presumably relishing another win.

The back of the card reads, “Roger refused basketball offers from Seattle SuperSonics & Boston Celtics to sign with Red Sox.”

Thus, he has had the Baseball Hall of Fame door shut in his face time and again. Had he become a Hall of Famer, his market value would have skyrocketed.

Unless Clemens enters the HOF, it’s hard to imagine his cards gaining serious traction in the next few years.