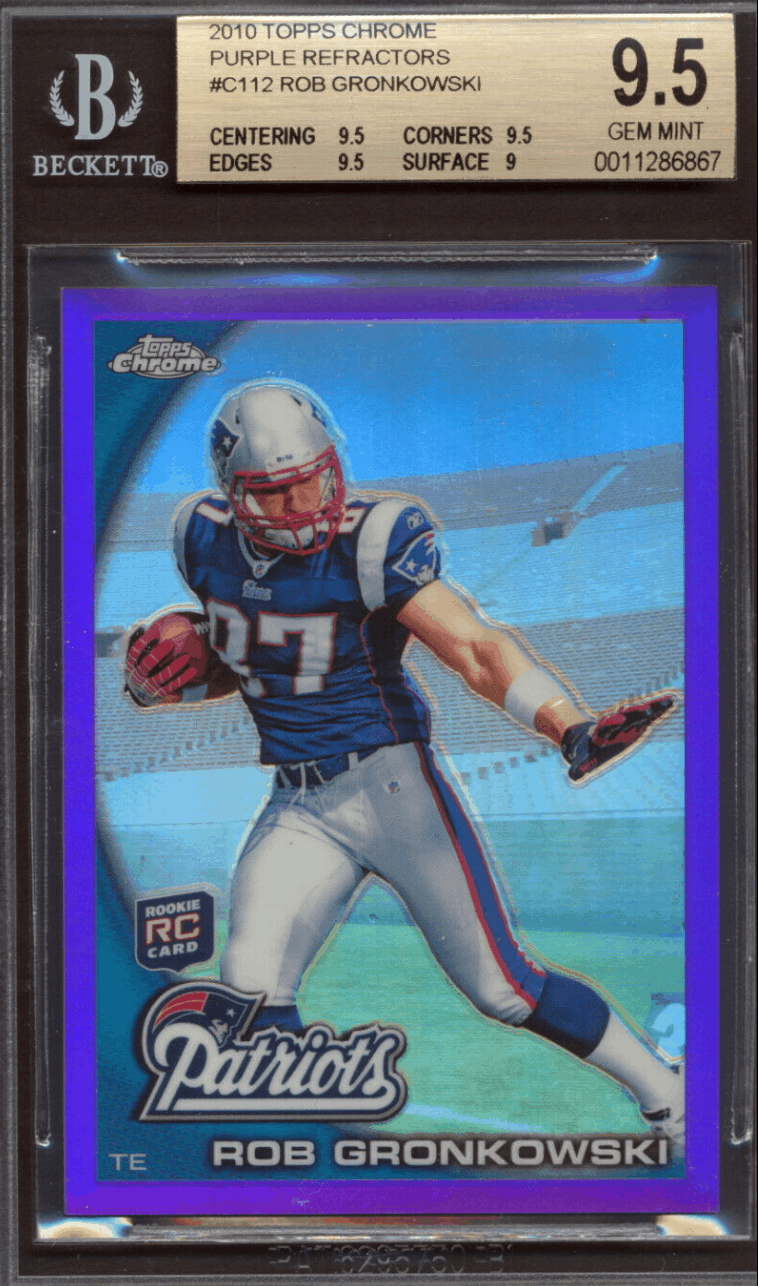 Rob “Gronk” Gronkowski (5/14/89) is a former tight end who currently works as a football analyst for Fox Sports.

A three-time Super Bowl champion who was selected in the NFL 2010’s All-Decade Team and 100th Anniversary All-Time Team, Gronk is undoubtedly one of the most popular players in the sport.

Here’s a rundown of his best rookie cards, with a checklist, additional info, and an investment outlook looking over the next few years.

Gronkowski has 30 rookie cards to choose from, including 13 autographed options:

We’ve pored through recent auction data to bring you a list with three of the most popular Gronk rookie cards right now. 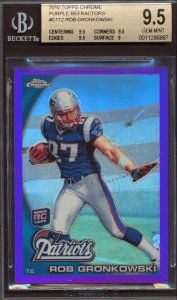 The 2010 Topps Chrome is Gronk’s most popular rookie card overall, featuring an RC logo and a strong design. There’s a signed version, as well as a number of Refractor parallels. A PSA 10 graded copy recently went for $84.00 at auction, with 35 bids. The reverse notes;

“Rob left the U. of Arizona as the most productive tight end in school history despite playing only two full seasons. A First Team All-Pac 10 choice in 2008, he’s as enthusiastic in run blocking as he is as a target in the passing game. With the ball in his hands, Gronkowski is as old-school as it gets, looking to run over – not around – the nearest defender”. 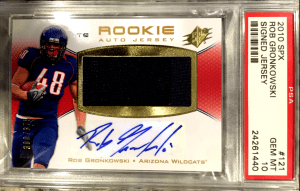 As the name implies, this is a premium rookie patch with an on-card autograph. The landscape design sees the patch take pride of place in the middle, with an image of Gronk on the left. There are 375 copies out there so it’s not the rarest option out there, but it’s still an attractive card for collectors. It took $88.00 and 40 bids to win a copy at auction in March 2020.

There’s no quote on the back, but you will find a guarantee for both the patch and the signature. 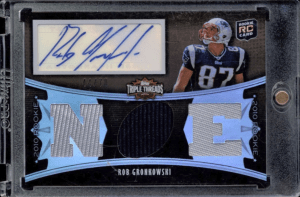 This card has everything. There’s an on-card signature, a large patch, a premium feel, an RC logo, and two numbered versions. A copy sold for $82.00 in March 2020. Fittingly, the reverse has a triple take;

“(1) Despite missing 2009, set U. of Arizona tight end career records for catches, yards receiving and TDs, (2) Big target with great hands, quickness of the ball and downward speed, (3) Father (Gordon) was three-year OL starter at Syracuse.” 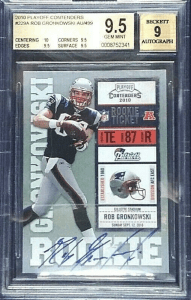 Being one of the best Tight Ends to ever play the game we fully expect Gronk rookie cards to rise over time.

For an estimated value of any of your Gronk rookie cards please email us at value@goldcardauctions.com (include at minimum to pictures… thank you!).

Gronk called it a day in 2009 after nine seasons in the NFL, at the tender age of 29. He pointed to the pain and the numerous injuries he had suffered over the years, and it’s fair if he wants to prioritize his health above all else.

He’s been mixing it in the WWE in recent months, as the latest celebrity to pick up their 24/7 title following an appearance at Wrestlemania 36. It’s likely to lead to another run in the public eye, while he could gain even more fans that are interested in buying his rookie cards.

(Fox signed a deal to broadcast WWE recently, and they’re hoping that their famous analyst will get more eyes on the product.) The point is, Gronk is still relatively young, always in the media, and people like him.

With so many rookie card options to choose from, it’s always going to be a slightly diluted market, even at the premium end. Some cards are clearly pricier than others, but most Gronkowski RCs are a safe bet, and a good mid-term investment.