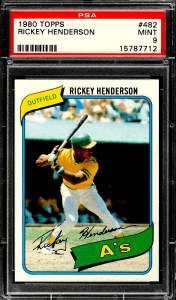 With two World Series wins and an endless stream of records and achievements which are almost unmatched, his longevity is legendary.

Starting off with the Oakland A’s in 1979, he eventually signed for the Yankees, the Blue Jays, the Padres, the Anaheim Angels, the NY Mets, the Mariners, the Red Sox, and finally the Dodgers respectively in 2003.

25 years at the top is enough to ensure there will be some interesting rookie card options, so here are three of the best, along with investment advice for the future.

We’ve looked at recent sales and auction data to bring you a list with three of the very best rookie cards featuring the “Man of Steal”.

The most popular Rickey Henderson rookie option by a wide margin, his 1980 Topps is also a key card from the set.

It features an image of the player squaring up on the plate, with a white and blue border. The reverse is packed with info, so it’s interesting to look at both sides.

His one true RC, there’s a couple of clear differences compared to the others on the list.

As well as the year of release and the Topps branding, the inclusion of an autograph from the man himself is enough to make it highly attractive for collectors.

Centering issues are typically the most common flaw, so be wary if it’s ungraded. 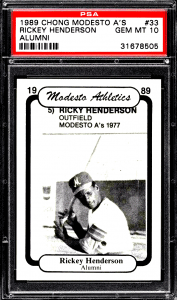 A small set with just 22 cards in total, the 1977 Chong is a black-and-white card featuring a grainy image of Henderson with bat in hand.

There’s no real design to speak of with plain black text listing his name and team, so why is it so valuable?

The answer is that the first print run misspelled Henderson’s name (Ricky), making it an oddity and a rarity for collectors.

The Savior of the Mets?: Top-Rated Pete Alonso Rookie Cards

It has been reprinted since, so look to graded copies if you’re unsure about the legitimacy of the seller.

It’s also the earliest card to make the list, raising the rarity even further. 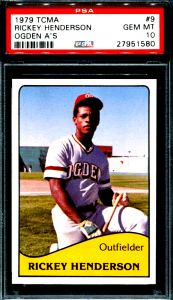 Another minor league card that can sell for big bucks, the 1979 TCMA was produced during his time playing with the Ogden A’s.

The image shows Henderson on one knee holding a bat, with their stadium in the background.

His name and position are listed at the bottom of the card.

It’s the more attractive option of the two earlier cards to some extent, although it will depend on personal preferences and how much value you attribute to an error.

The 1977 Chong Modesto A’s Rickey Henderson rookie card is the most valuable of his RCs with the Topps not far behind.

Our favorite in terms of investment ROI is the 1977 Rickey Henderson Chong Modesto A’s.

Henderson still holds a number of MLB records that will probably never be broken, including career stolen bases (1,406), runs scored (2,295) and unintentional walks (2,129), and entered the Hall of Fame at the first time of asking in 2009.

He had to be seen to be believed, but his legacy will live on in the record books for years to come.

More recently, Henderson has kept out of the limelight, occasionally helping out with coaching for the Mets, but the stories about his playing days are endless, and nearly always entertaining.

Must Read: Why Investing In Sports Cards Gives You Double The Return Compared To The Stock Market

The hype surrounding his cards has had some time to cool down following his retirement in 2003, but they’ve actually continued to hold out in terms of value and interest.

The error card is always going to be a good choice and a viable table piece for collectors, while the 1980 Topps is one of the most popular cards of the era.

It’s tripled in price since 2012, which is a great ROI if you had the foresight to buy, and the patience to hold onto the card for a few years.

It’s clear that the majority of Henderson’s older cards are always going to be valuable, and they’re difficult to find in good condition considering their age.

If you can invest in higher grades they’re always likely to be a good investment, with little chance of losing value.

CTA – What a player Henderson was! For more investment ideas, we have five rookie cards that could double your money in 2020, or you could look to another legend in the form of Cal Ripken Jr and his RC options.