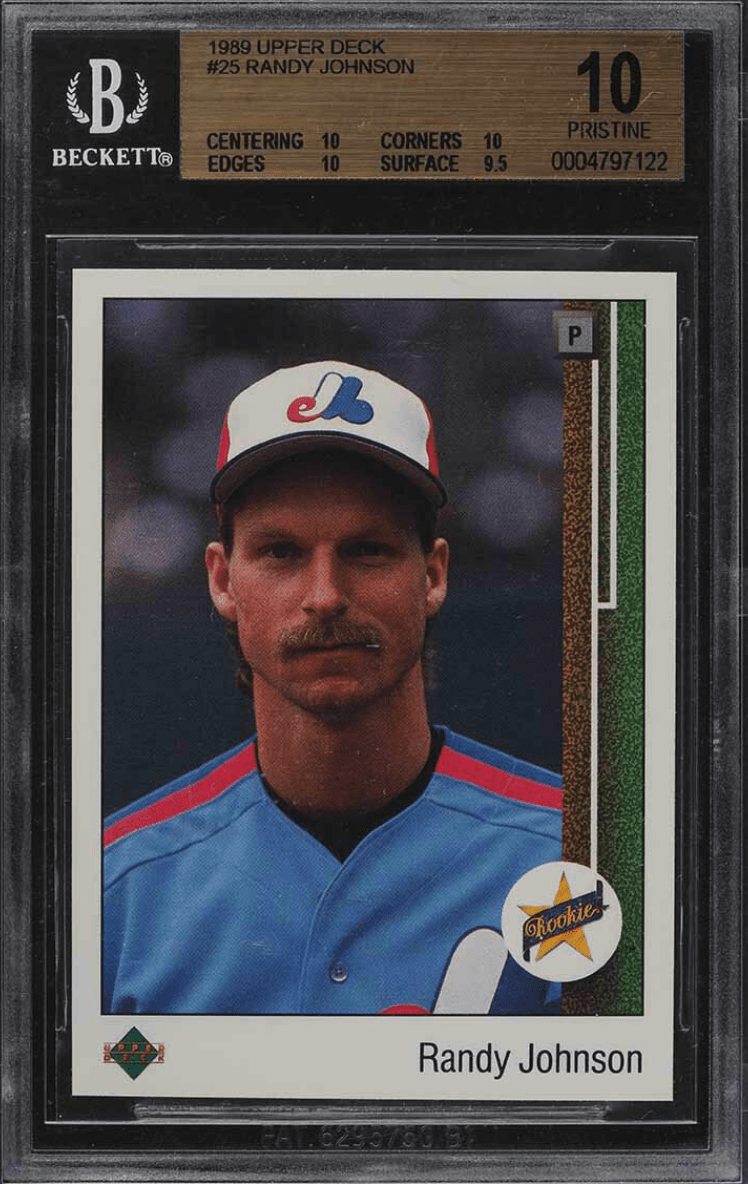 Johnson stood 6 ft 10 inches tall and was one of the most fearsome pitchers to ever take the hill with his long, knotty hair and a crooked scowl that seemed to say F you.

Randy Johnson was inducted into the Major League Baseball Hall of Fame in 2015 receiving 534 of 549 first-place votes.

Here are the top BIG UNIT rookie cards from an investment perspective. 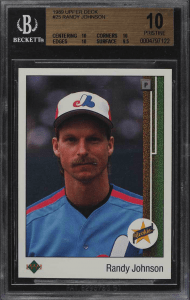 The 89 UD BIG UNIT rookie card is rock solid investment for collectors looking to own a chunk of Randy.  We have bought a few of these over the last year (PSA 10 graded) and will most likely sprinkle a few more in when the auction is right. Not only do we like the image of Johnson on the card but the 89 Upper Deck Set is a classic in its own right.

Numbered #25 the back of the card reads “Randy went to Southern Cal on a combination basketball/baseball scholarship but wound up concentrating on baseball for the Trojans. He may be a year away from making the Expos pitching staff but when he does he surely will have the distinction of being the tallest pitcher in the majors. When he gets all of his 6’10 frame behind his fastball, it comes out at 98 mph. And his control gets better each year, though when you can throw as hard as Randy does, it helps to be a little while. He was very impressive in late-season trial with Montreal in 1988.” 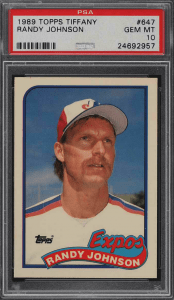 The Topps Tiffany Randy Johnson rookie card is a solid investment that won’t break the bank and has the prestige of being a Tiffany.

Numbered #647 the back of the card reads “Randy was signed as a Second Round Draft Selection of the Expos, June 9, 1985, by Cliff Ditto and Bob Fontaine Jr.” 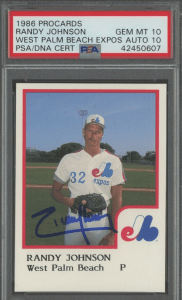 WE LOVE THIS RJ CARD!

First, we have never heard of Procards, second, it has an auto, and third, it’s from the West Palm Beach Expos (who or what is that?).

Good luck finding this card up on eBay but if you do attempt to get a bid in on it.

Related Content: Check out our picks for the best Barry Bonds Rookie Cards

BIG UNIT rookie cards should only steadily increase in value over the years as he has a huge cult following among die-hard MLB fans.

If you would like a price estimate on any of his rookie cards please email us at value@goldcardauctions.com.

We feel Randy Johnson rookie cards are a sneaky buy right now (much like Greg Maddux Leaf RCs) as he does exude a certain cult-like following in the card world and was one of the best pitchers of his era.

Picking up a few of his 89 Upper Deck RCs will only help your sports card investment ROI.