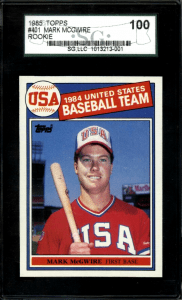 Mark McGwire (10/1/63) is a former first baseman who featured for the Oakland Athletics and the St. Louis Cardinals as a 12-time All-Star, going on to coach the Los Angeles Dodgers and the San Diego Padres as well as the Cardinals.

He is best known for breaking the Roger Maris single-season home run record in 1998.

ESPN is soon to release a documentary based upon the summer of 1998 in which McGwire and Sosa traded home run blows like Ali and Foreman in the rumble in the jungle.

We would bet a large portion of our income that this doc will send both McGwire and Sosa rookie card prices through the roof (or at minimum up 30%).

We’ve prepared a rookie card checklist, as well as three popular options and an investment outlook for the next few years.

The base card is the most expensive Mark McGwire rookie card option by a wide margin, although this 1985 Topps card also has a rarer Tiffany edition.

There’s a large Mark McGwire photo on the front (very 1989 Ken Griffey Jr. Upper Deck) picture him with a goofy-ass grin and the bat hung over his right shoulder.

Our Take: This is the McGwire rookie card you want to have if you can afford it… we feel this card could very well double in value at high grades in the next 4 months (buy PSA 10 and 9 grades). 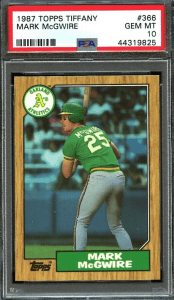 Our Take: A good option for those who can’t afford or can’t get a good deal on the McGwire USA rookie card. Honestly, we like the looks of this card more… we have always been BIG fans of the 87′ Topps wood border! 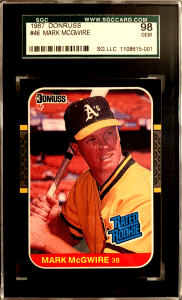 Another SOLID McGwire rookie card and honestly maybe our favorite.

Whenever we see that classic “Rated Rookie” stamp on a card we always smile… brings us back to youthful days long gone but not forgotten.

Posing for the photo before a game, the card shows McGwire with the bat and an annoyed yet dull look on his face… he face screams “get these people out of here so I can go drink my protein drink wink wink”.

Our Take: A gorgeous McGwire rookie card that is an easy buy at PSA Grades 10 and 9. 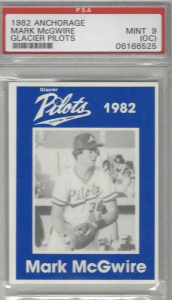 It definitely came out towards the end of the decade, but McGwire’s 1982 Anchorage Glacier Pilots is still a popular choice for collectors.

Card Info: No Number and the back displays a range of stats i.e. 6’5, 215, and reads; “Mark threw a no-hitter against Laramie, Wyoming in American Legion Tournament finals”.

Our Take: A boring card with a boring photo but something about it drags us in and we actually bought a PSA 10 a few weeks ago. We’re not saying you should go out and buy a bunch of McGwire Pilots cards but one for your collection will do nicely with the upcoming doc.

The McGwire rookie cards are about to explode due to the upcoming ESPN documentary featuring him and Sammy Sosa which is set to drop June 14 entitled “Long Gone Summer”.

If you have a McGwire rookie card and would like us to provide an estimated value of the card please send 2 pictures (at minimum) to value@goldcardauctions.com. 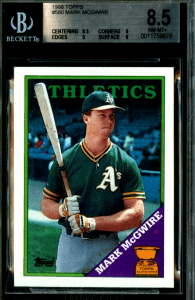 McGwire admitted to using steroids back in 2010, and he hasn’t been elected into the National Baseball Hall of Fame because of his candor (similar to Barry Bonds).

Likes Bonds we do expect McGwire to eventually make the Hall of Fame… it’s just a question of when.

Hall of Fame debate aside as we mentioned before ESPN is releasing a McGwire – Sosa documentary called “Long Gone Summer“… this should 100% boost McGwire rookie cards as the “Last Dance” doc sent Michael Jordan rookie card prices to the moon and back!

Long Gone Summer is set to drop on June 14… so McGwire rookie cards can be bought up until early June BUT watch out for other eBay buyers doing the same… don’t overpay too much.