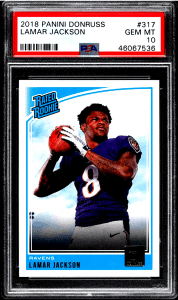 Baltimore Ravens quarterback Lamar Jackson has a number of popular rookie cards on the market and should be a solid investment over the next few years as he seeks a Superbowl ring.

Jackson attended the University of Louisville where he won the Heisman Trophy in 2016 and was a nominee in 2017.

It didn’t take Smiley Face (aka Lamar Jackson) long to catch up to the speed of the NFL.

He was named an all-pro in only his second year where he tossed 36 touchdown passes to go along with 3,127 yards passing and a mind-blowing 113 Quarterback Rating.

But even more impressive was his 7 running touchdowns to go along with 1206 rushing yards in his sophomore year!… and no he wasn’t lining up as a tailback!… hence the value of Lamar Jackson rookie card exploded!

Let’s take a look at some of his best Lamar Jackson rookie cards for your investing dollar, along with an investment outlook for the near future.

A SICK looking Lamar rookie card that is dripping with the cool, chill, and freshness that only the swag of a Lamar Jackson can deliver.

Numbered #317 the card shows the king of jukes holding the football above his right shoulder with a calm, cool, and collective look on his face… Lamar seems to know in this picture that he is destined for BIG things in the NFL. 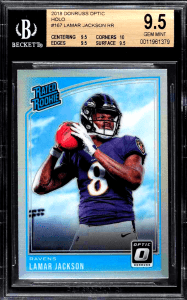 The Gold Donruss optic version is highly desirable, and it’s also available in red and purple along with other variations.

You’ll be able to tell the difference straight away if you look at the color of the borders surrounding the card.

You should be able to grab a mint condition Gold version for roughly $500, while the purple version goes for under $200. 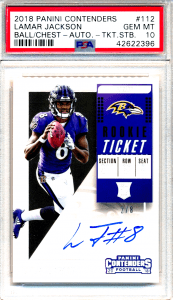 This is one of the hottest cards on the market today (only Luka Doncic rookie cards are hotter!) 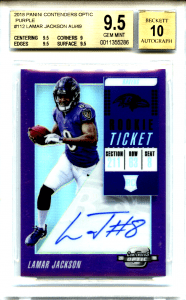 The Contenders Optic card is an affordable option, and it’ll catch the eye of most collectors.

The card features the player on the left and a rookie ticket on the right, with a signature at the bottom.

You should be able to pick up the base for between $100-$200 depending on factors like the condition, and it’ll likely shoot up in value if the Ravens make the playoffs again. 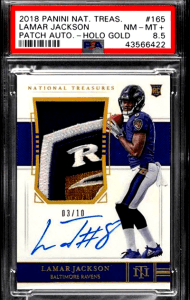 Jackson’s autographed rookie patch is worth big bucks, with a limited print run and lots of bids at auction.

The patch itself is located on the left-hand side, with an image of Jackson primed to throw a football on the right.

The signature takes pride of place in the middle, while the reverse has information about his overlooked passing game.

It’s a rare edition that could go on to double in price if he reaches his potential.

We can only imagine what Lamar rookie cards would have done had he won the Superbowl… BOOM goes… well you get the picture… and we bought half a dozen at low prices before the 2019 season began.

As always if you have a Lamar Jackson football card and would like to know the estimated value please hit us up at value@goldxardaycuins.com.

Or if you would like advice in regards to buying a Lamar football card before you pull the trigger… hit us up at advice@goldcardauctions.com.

Or you can always DM us on the Gold Card Auctions FB Page! 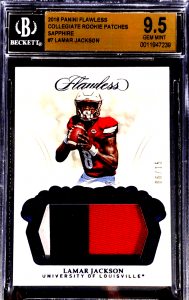 Jackson was a late pick in the 2018 draft, but coming in as the 32nd choice worked to increase the overall value of his rookie cards.

Investors have woken up to the idea that he’s going to be the Ravens’ starting QB for the foreseeable future, even if he doesn’t always have the most accurate throwing arm.

His record-breaking rookie year helped the team to their first playoff appearance in three years, and another solid season will likely lead to another bump for his rookie cards.