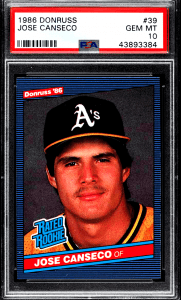 Jose Canseco was drafted in the 15th round in the 1982 MLB June Amateur Draft by the Oakland A’s… talk about a value pick.

Jose played 17 years in the MLB and amassed a mind-boggling 462 home runs… many collectors forget just how could of player Canseco was as his stats are often overshadowed by his admitted steroid use (and rating out other players for their use).

He truly had some mind-blowing seasons… in 1988 Canseco won the league MVP, batted .307, had 42 homers, and 40 stolen bags!… Jose Canseco in the 1988 RBI Nintendo Game was a beast and could be compared to Bo Jackson in Tecmo Bowl in terms of unstoppable video game athletes of all time.

Then in 1991, he put up similar mind-blowing stats hitting a personal best 44 homers to go along with 122 RBIs and 26 swipes!

Unfortunately, Canseco Hall of Fame talent was overshadowed by his admittance steroid use and calling out other big-name players in the league for their use.

In 2005 he published “Juiced: Wild Times, Rampant ‘Roids, Smash Hits & How Baseball Got Big” in which he actually takes credit for introducing steroids to Mark McGwire, Juan Gonzalez, Rafael Palmeiro, Ivan Rodríguez, and Jason Giambi… not a smart move Jose.

We have a love-hate relationship with Jose Canseco… on one hand, we have mad respect for a player who could hit 40 homers and steal 40 bags in one season… but on the other hand, he could never keep his mouth shut and always has a need to be in the spotlight (for good or bad reasons).

Let’s take a look at the best Canseco rookie cards for investment purposes.

This is one of the more recognizable and better-looking cards of the 1980s.

Numbered #39 the card shows a close-up yearbook style photo of Jose with a sly little grin on his face with the classic “Rated Rookie” graphic in the bottom left-hand corner… we love that Rated Rookie graphic… always have always will!

A great high-end Canseco rookie card with the potential to earn a delicious ROI.

Invest in another stud from the ’80s: Rickey Henderson Rookie Cards 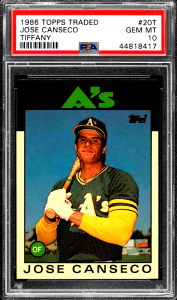 We are a huge fan of this old school Jose Canseco Topps Tiffany rookie card… on a side note, Topps should 100% consider bringing back the Tiffany card!

Numbered #20T the card features a rather smug ass looking Canseco with the bat hung over his right shoulder… it almost seems as if he was doing roids at the time this photo was snapped but most likely not. 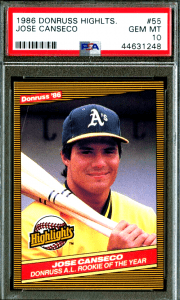 Were not a huge fan of the Canseco Donruss Highlights rookie card but it might not be a bad idea for those looking to spend a minimum amount of money and still have Canseco in their portfolio.

Numbered #55 the card shows Canseco with the bat slung over his right shoulder with another smug ass grin on his face…. classic Canseco.

On average the highest valued Jose Canseco rookie card is going to be the 1986 Donruss Rated Rookie Card at a PSA 10 or BGS 9.5 grade.

If you have a Jose Canseco rookie card and would like to know its worth please email us pictures of the card to value@goldcardauctions.com or DM us on the Gold Card Auctions Facebook Page.

As we stated earlier in this write up we have a love-hate relations ship with Jose.

If he could have just kept his head down and kept his mouth under lock and key things could have turned out much different for him.

We don’t blame him or any other player who used roids at the time as just about every major power hitter in the game was on them… what we don’t respect is him running his mouth about it… but in part that adds to the mystique of his baseball cards and himself as a person.

Jose Canseco rookie cards are a pretty good buy as this guy has some reach outside the game itself… for example, my wife knows who he is… he also has a very, VERY good looking daughter that keeps the last name in the news from time to time.

Were not loading up on Canseco rookie cards but will eventually by a few… we will target the Topps Traded and Donruss Rated Rookie cards as we feel those have the best ROI potential.

Ownership Disclosure: None but looking for Rated Rookie and Tiffany