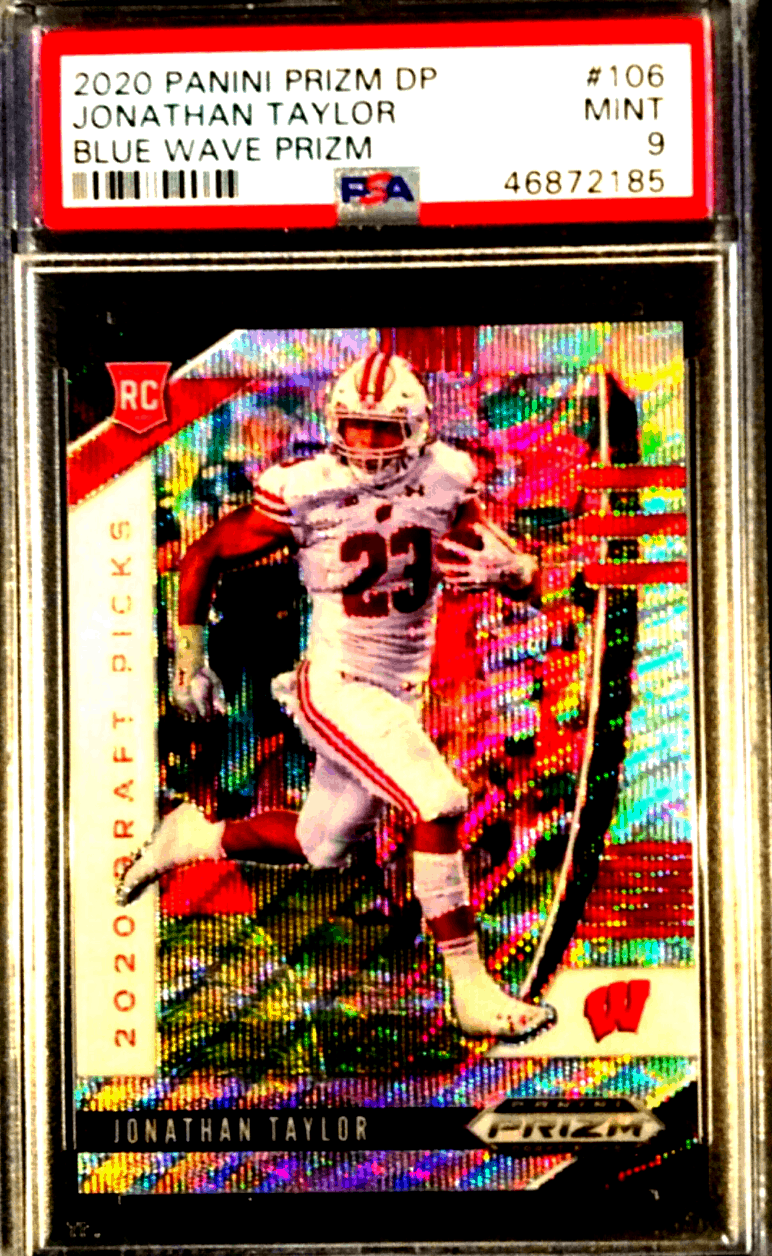 Jonathan Taylor (01/19/99) is an RB who was drafted by the Indianapolis Colts (41st overall) in 2020. The hottest of prospects, he’s a two-time recipient of the Doak Walker Award, honoring the top running back in  United States college football.

Collectors and investors have already begun to take notice of Taylor’s shiny RC options, so here’s a rundown with three of his best early cards, including an investment outlook for his rookie year and the next couple of seasons.

We’ve combed through recent auction data to bring you a list with three of the best Jonathan Taylor rookie cards that are available right now. Panini dominates as usual, but there’s a good range of options overall. 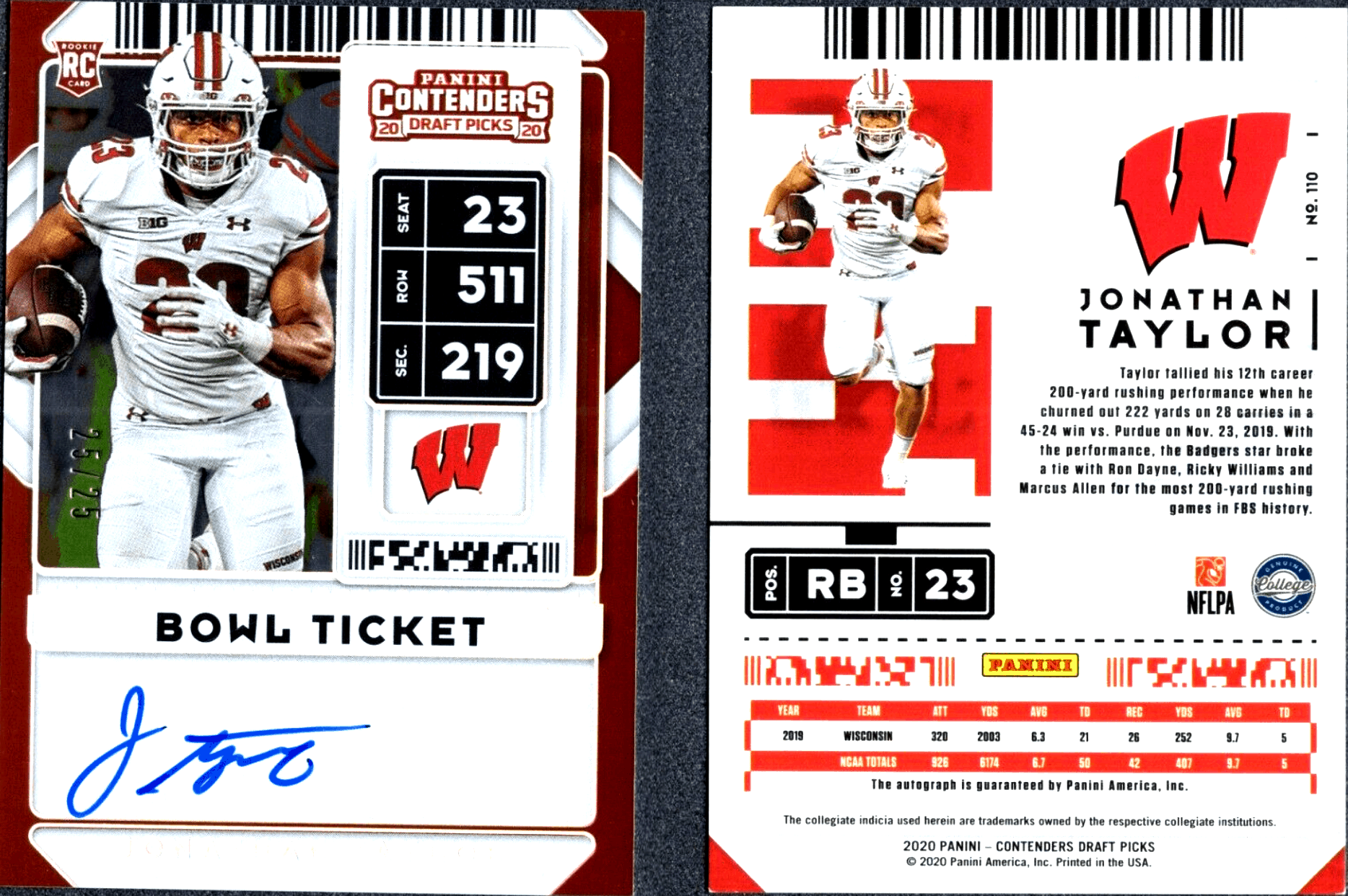 Taylor’s 2020 Panini Contenders is a popular set of cards that already tends to receive a lot of bids at the auction, no matter the edition. The Playoff Ticket is the version we’d look out for, featuring an image of the player in mid-sprint with guns on show, while there are variations that feature Taylor in a red jersey instead of the white on his Playoff Ticket. It has his college logo (Wisconsin) on the front, while they all look great thanks to the red and white card design.

There’s a large on-card auto found at the bottom, filled in blue ink, while it’s worth mentioning the crisp RC logo found next to the player image. It’s clear to see why it’s already becoming a fan favorite.

On paper, it’s hard to do better than a signed RC with a serial number and a unique design. The 2020 Prizm Draft Picks is another solid option if you’re looking for a great Jonathan Taylor rookie card, although it isn’t as aesthetically pleasing as the others on the list.

Random lines and chunks have been cut out and added to make the border design, so it changes appearance slightly depending on the parallel color.

For example, the Green Ice version looks terrible, while the Gold Ice has so much going on that it’s easy to miss an action shot of Taylor in the middle of the card. It’s still fairly affordable, and many collectors prize Prizm rookie cards above all others. 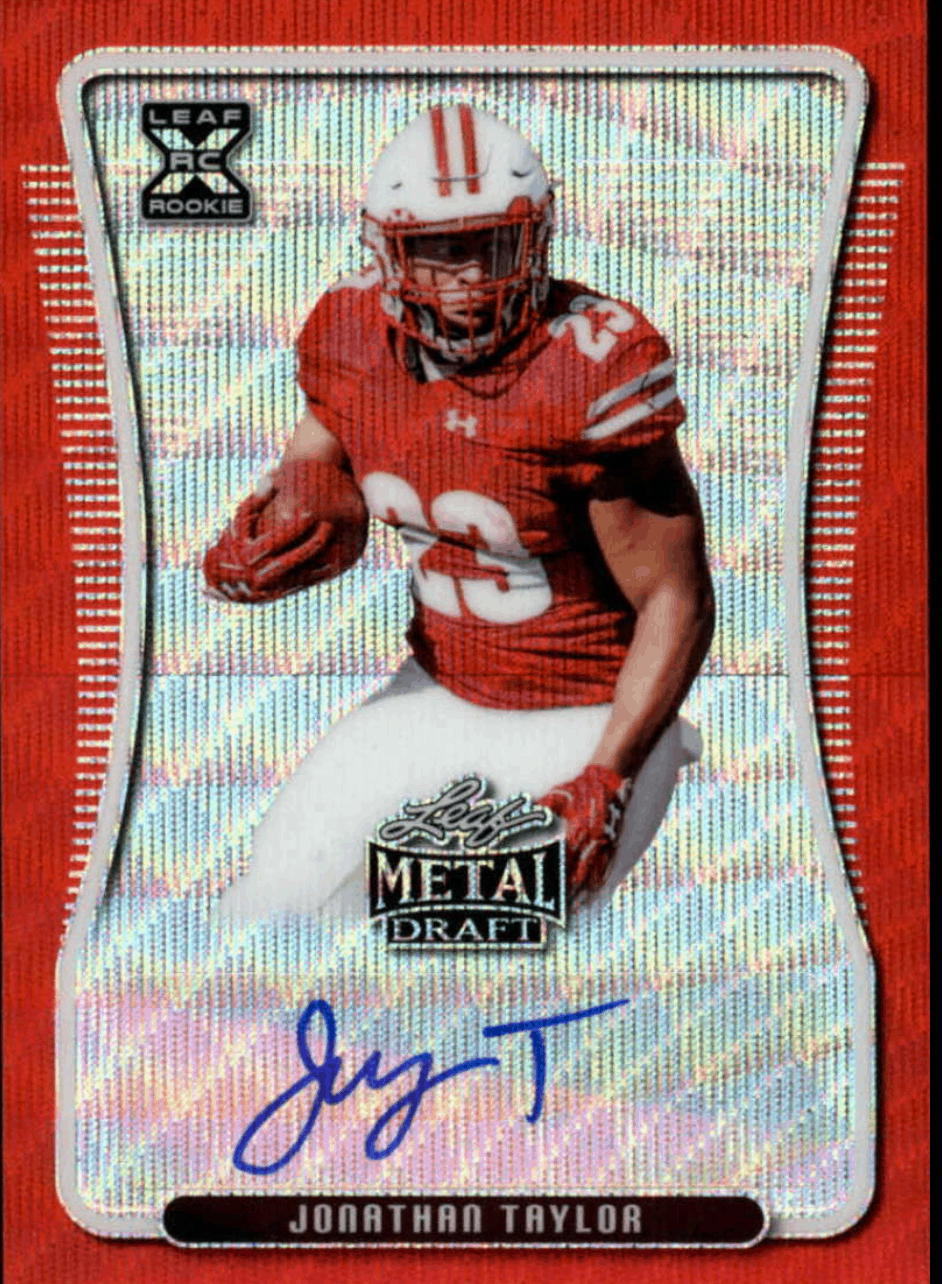 The final option to make the list is his 2020 Leaf Metal Draft card. Taylor is pictured with his eyes on a target, and a ball held in his right hand. He stands out thanks to the outline, while it has a simple background design.

There are so many parallels that can be grabbed for next to nothing, although they do receive a decent number of bids at auction. There’s also a signed version that can be found in the Leaf set, with its own selection of parallels to keep an eye out for. The low print runs allow the rarest editions to sell for a similar price to the Contenders parallels, so it’s not just a budget option. 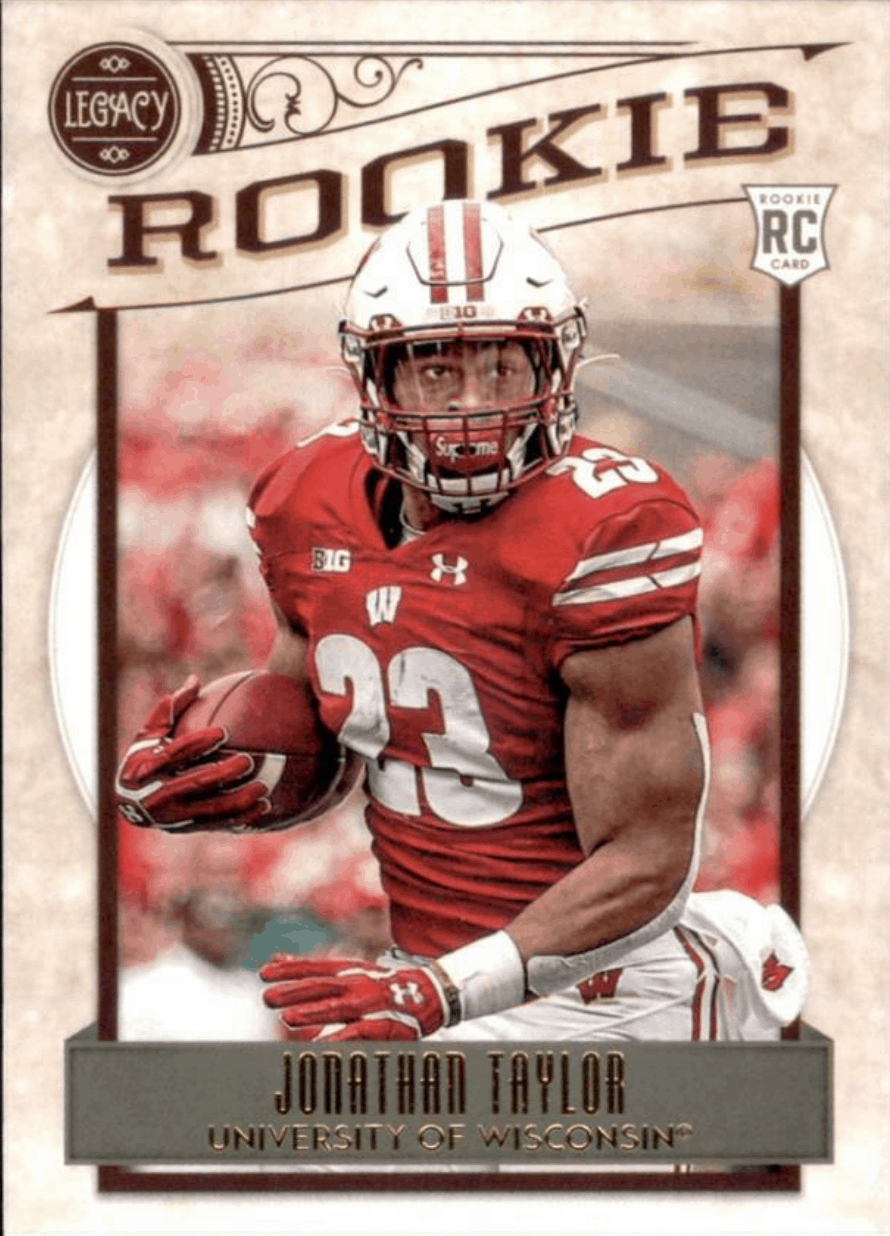 Taylor rookie cards are correctly priced based on no NFL stats to date.

If you are on the brink of buying a Jonathan Taylor rookie card but would like a second opinion please email us at advice@goldcardauctions.com and we will provide input.

Taylor ended his college career at fourth on the all-time FBS rushing-yards list with 6,174 yards, despite leaving a year earlier to join the draft, and the Colts. They traded up for the chance to add Taylor to their roster, so he’s clearly a major part of their long-term plans for the time being.

He’ll be up against NFL vet Marlon Mack who has started 22 of 40 career games with the Colts, but head coach Frank Reich has promised that both RBs will get good game time over the season. Of course, it’s still unclear as to who will be the undisputed starter when all is said and done.

From an investment perspective, his cards are reasonably affordable, and he has a good chance of highlighting why his team took the opportunity to trade up for his services. There are lots of interesting parallels that have such low numbers to choose from, and it’s not like you’ll stand to make a major loss if he spends the season on the sidelines.

Having said that we just can’t wrap our heads around spending any of our portfolio coins on Taylor rookie cards… for now… check back after a few games and we may sing a different tune.