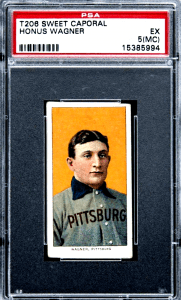 It was July 19th, 1897 when Honus Wagner played his first game of Major League Baseball.

It wouldn’t take the kid long to adjust to the big leagues as he was one of the best players in the entire league after only a few seasons.

Wagner would manage to pick up the nickname “The Flying Dutchman”, during his career due to his German background and would entertain fans across the country with his strong play.

Wagner would switch teams to Pittsburgh from Louisville at the beginning of the 1900 season and it was during that year that he would take a large leap forward.

He led the league in crucial batting categories such as batting average, doubles, and triples as well as total bases.

Wagner would continue to lead the league in many batting categories over the course of his career.

Wagner continued his strong play throughout a long career, playing into his 40s and he was extremely effective the entire time.

Wagner is commonly recognized as one of the best shortstops of all time and he truly excelled in all facets of the game as a complete, well-rounded player.

There is no doubt that Wagner was a great baseball player, in fact, he was one of the greatest of all time, yet his legacy may be remembered more for his impact on baseball cards than his play on the diamond.

It’s a Honus Wagner card that holds the records for the most expensive sports card ever sold and it’s the same card that has penetrated past the niche of sports collectibles into an iconic piece of American history.

Baseball Cards in the Early Days

Starting around 1875 it became common for tobacco companies to add cardboard cards to a pack of cigarettes.

This was done mainly for two reasons: to stiffen the packs as well as provide a collectible that would work as a marketing effort.

The American Tobacco Company was one of these companies that would use baseball cards in their cigarettes and from 1909 to 1911 they produced the famous T206 series.

This T206 series has become famous because it is the series that contains this extremely rare and valuable Honus Wagner card among many other Hall of Famers.

However, Wagner was against smoking and didn’t want to be associated with a tobacco company.

Beyond that, Wagner didn’t want a company that represented the very thing he stood against to be able to use his image to profit and market their product.

Wagner would threaten the American Tobacco Company with a lawsuit and wanted no cards that pictured his likeness to be sold or placed in cigarette packs.

Production for Wagner cards was ended and because of that decision, there are very few of them today.

Another aspect that possibly contributed to the fact as to why Wagner ceased production of the card that pictured him was because of a monetary dispute.

It’s rumored that Wagner did not agree with the compensation he would be receiving and therefore ordered production to end as a negotiation tool.

Either way, the image of a celebrity is something that they value and protect as it is very valuable, and Wagner did exactly that.

However, Wagner was known to appear in other advertisements for items such as chewing gum or beverages at the time so it’s clear that somewhere along the line his relationship with the American Tobacco Company fell apart.

This scarcity of the card combined with Wagner’s greatness on the field and his large fanbase that appreciated his skills have led to this card being the most valuable sports trading card in the world today.

The Legacy of the T206 Wagner Card

Wagner’s card has taken on a life of its own and crossed the barrier from a niche sports trading card to a major piece of not only sports history but America’s history.

Perhaps the most famous story around the Honus Wagner T206 card comes from when one copy was purchased by none other than NHL legend Wayne Gretzky in 1991.

The early 1990s were a great time to be a collector of baseball cards as the industry was booming and interest around cards was at an all-time high.

These high-profile auctions only helped to grow the industry as they would make news headlines.

The Wagner T206 card that Gretzky would purchase would not come without its own controversy and speculation.

Rumors would spread that the card had been altered at some point or cut from an undistributed sheet. This would have helped the card remain in such strong condition.

The card had also been in the possession of Bill Mastro at one point in time.

Mastro is a famous sports memorabilia collector and dealer who was later investigated by the FBI for using dishonest methods to increase the price of his memorabilia.

With the Honus Wagner T206 being worth so much money, the motive to alter the card or produce a counterfeit is very obvious.

Sums of money that high will usually bring the worst out of people as they are corrupted by the possibility of riches.

In 2013, it was revealed that Bill Mastro had altered the famous “Gretzky Wagner” card.

He admitted that he had cut the card to make it appear in better condition.

This could have explained why the card was in solid condition considering how old it was.

Out with the old in with the NEW: Hot Prospect Wander Franco

In fact, some speculate that many of the Wagner T206 cards have been altered at different points in time as collectors attempt to clean the edges of the card and make it look more appealing when it comes time to grade.

Any card that has been in circulation for so long will often eventually get put into the hands of the wrong people who attempt to alter it, meaning that before purchasing any card it is best to get it professionally authenticated.

Any seller who is scared to get the card authenticated should be seen as a red flag.

Another famous edition of the T206 Wagner card is the “Jumbo Wagner”.

This alongside the “Gretzky Wagner” is two of the only three known Wagner cards that have received grades above a 5 on the Professional Sports Authenticators scale.

The card is dubbed the “Jumbo Wagner” due to the fact that the borders are slightly miscut which gives the card much larger borders.

Inside of those borders the “Jumbo Wagner” is in very good condition and for that reason it is one of the most sought-after cards in the world, selling for millions of dollars multiple times.

The great quality of the image inside the thick borders makes this possibly the best Wagner to own for the future, especially considering the fact that it is now known that the “Gretzky Wagner” had been altered.

Every time a Wagner card goes to auction and it fetches millions of dollars it alerts the general public to a higher-end side of collecting and a different world of sports memorabilia.

While the card that Gretzky owned, now known as “the Gretzky Wagner”, sold for a whopping $2.8 million dollars in late 2007 to an anonymous buyer who was later revealed to be Ken Kendrick, who holds a managerial role with the Arizona Diamondbacks.

Because the card is so old it can be very difficult to find in good condition.

In fact, most of the Honus Wagner’s graded by PSA have resulted in grades around “Very Good 3” and the surrounding 2 and 4 grades.

While a modern card that receives these grades may not be worth very much at all, because of its age these are some of the better grades a Wagner T206 card has ever received.

Therefore, a card with these grades can be worth hundreds of thousands to millions of dollars.

No T206 Wagner cards are selling for anything less than at least three-quarters of a million dollars these days and if you find one for that cheap it may be worth the hefty investment to hold the card and resell it for more.

Not many investment opportunities offer the quick and high returns that baseball cards can, especially a baseball card of this significance.

“The Gretzky Wagner” is still the most famous of all Wagner T206 cards and is the one that continually sells for the highest price.

While the development of the fact that it has been altered may affect the feelings of future buyers, the fact remains that this card has taken on a life of its own and its high-profile history should keep the price high.

Ask any sports memorabilia collector about what their holy grail is, and plenty would mention the Honus Wagner card, but many would specify it further to “The Card” which is another name for the T206 Wagner owned by Gretzky.

Cards we have recently purchased: 5 Cards We Just Bought

Every time this card has been sold the price has continued to rise, and even versions of the card that are not in very good condition will sell for the same price as a luxury car.

If you are able to get your hands on this card not only will you have the most valuable sports trading card ever made, but you will have a piece of the fabric of the history of America as a country.

Baseball has been the nation’s national pastime and the MLB is the oldest of the four major North American sports leagues.

It has been a consistent aspect of American life for a very long time and has been there through the ups and downs.

Many, many generations of Americans have been able to enjoy watching their heroes on TV and playing catch while trying to emulate them.

This card represents all that. It represents the history of an entire country and the pastime that has been a part of the fabric that has held it all together.

To be able to own something like this in your collection will always be a strong investment.

Because of that, this card will always be a strong investment option, but if you don’t have a large amount of money ready to be spent than you should be ready that the only way you will get your hands on this card is if a miracle occurs.

Your best shot may be to call your old relatives and ask to search through their old card collections and hope for the best.

If you do manage to find one of these cards then you have struck gold as even in terrible condition, they can be worth quite a hefty sum.

Before purchasing a T206 Honus Wagner card one should get the card graded or confirm the authenticity in some way.

Again, when dealing with memorabilia that is worth so much there are sure to be counterfeiters looking to take advantage and make a quick buck.

This is a crucial step in buying any card but especially in this situation when the card is worth so much.

If you are lucky enough to get your hands on an authentic Honus Wagner T206 than realize that you carry a piece of history in your hands.

Wagner was not only an amazing player, one of the greatest ever no doubt, but has enhanced his legacy through this extremely rare card that has become an icon for America.