The Eddy Belfour rookie card is one that collectors in their 30’s are very familiar with.

If you weren’t a Blackhawks fan you most likely had a strong dislike for this guy but for some reason still collected his rookie cards.

I know me and the crew I ran with at the time had a love/hate relationship with ol Eddy B… read on to learn which Ed Belfour rookie cards are worth your dime. 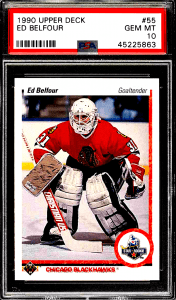 Considered to be one of the greatest of all-time, Ed Belfour (4/21/65) is a retired Canadian goaltender who made six All-Star game appearances between 1992 and 2003.

A Stanley Cup winner in 1999, he featured for the Chicago Blackhawks, the San Jose Sharks, the Dallas Stars, the Toronto Maple Leafs, the Florida Panthers, and Swedish second division Leksands IF respectively in a stellar 19-year career, retiring in 2008.

Here’s everything you need to know about the best Ed Befour rookie cards, with a trio of great options and an investment outlook looking at the next few years.

Befour’s rookie cards hail from 1990, during an era when there weren’t so many RC options on the market. (They also don’t come with extensive parallels and refractors you’ll find in modern sets.)

There are five Befour RC’s in all, and none are signed, so which ones should you be adding to your collection?

The 1990-91 Upper Deck features an action shot of Belfour on the ice, with a large ‘Star Rookie’ logo located on the bottom right corner.

The reverse lists his basic stats, as well as info about his IHL Rookie of the Year award.

It’s not rare by any means, but it’s still a popular RC option.

*There’s also an error card with a French translation of the word “goaltender” in the top-right corner, which says “Gardien de but.” 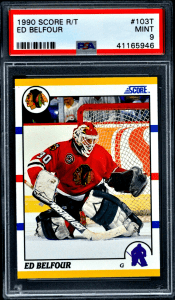 As with the Upper Deck card above, the 1990-91 Score Rookie shows Belfour in action, with a shot I personally prefer.

The goalie is concentrating on making a save, while the background is slightly more detailed.

It also has an up-close image of the player on the reverse, to go with extensive personal info.

It was printed in smaller numbers compared to the others, making it slightly more expensive in comparison. (However, even the rarest early 1990’s hockey cards were typically overproduced.)

It makes for a great entry-level investment piece as long as you’re looking at crisp, high graded versions. 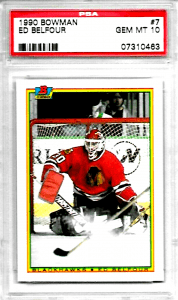 A simple, white-bordered card, the 1990 Bowman shows Belfour at the ready between the goalposts.

Aside from a wayward fan peering in from the background, there’s not much else that’s notable about this RC aside from the vintage style. 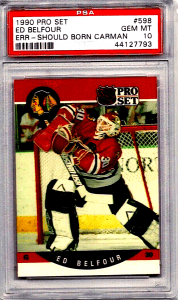 If you would like an estimated price of an Ed Belfour rookie card that you have had in your 7th grade Adidas shoebox please email us at value@goldcardauctions.com.

With a lack of signed cards and minimal options to choose from, Ed Belfour rookie cards haven’t exactly set the world alight.

He’s still a fan favorite, and one of the best goalies in recent memory.

Unfortunately, he made the news in January 2020 after police responded to a drunk and disorderly complaint in Ohio.

The arrest report alleges that they found Belfour; “on the floor clutching a curtain rod that had been ripped out of the drywall above a window next to him.

The subject was kicking the spa door while he was laying on the ground.”

It’s not ideal for the two-time Vezina Trophy winners’ legacy, but nobody is perfect, and most fans are forgiving of former star players.

It’s unlikely to affect the prices of his rookie cards.

In terms of value, we’ve listed in the cards from high to low above.

The Bowman is especially affordable, while the Tiffany card is always likely to command a higher price tag.

As the rarest of the bunch, it’s worth keeping an eye out for high-graded (10s) versions of the Score Rookie, as it’s the best investment option by a wide margin.

You might be better off looking at cards from the latter stages of his career if you’re looking for expensive options, as the majority of his RC’s were overproduced to a ridiculous extent.

It’s the reason why even a gem mint version of one of the cards listed above is pretty affordable, and why they won’t be worth a five-figure sum anytime soon.

Ownership Disclosure: We currently own 3 Belfour Upper Deck and 2 Bowman rookie cards (all in PSA 10 grades).

CTA – Belfour could very well be the greatest goalie ever, but it’s not reflected by his undervalued collection of rookie cards. For more hockey investment pieces, check out our list with the best five Young Guns of all time, or the Gold Card Auctions Hot 10 for the most hyped cards from a range of sports.

Before you buy a card email us at advice@goldcardauctions.com to avoid buyers’ remorse!