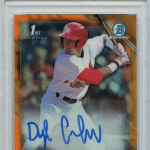 Dylan Carlson Rookie Cards are about to explode! We have been paying close attention to the St. Louis Cardinals Spring Training and this kid has been the talk of the town!

This is exactly what Mo was hoping for by not signing a big-time free agent over the off-season (it was a huge risk but one that appears to be paying off).

Now it is still early but we have never heard the Cardinals organization rave about a kid the way they do about Carlson.

We have already purchased more than 50 of his rookie cards and are adding daily.

Having said that here are some of the best Dylan Carlson rookie cards you will want to invest in if you believe in him as we do.

Please note there are the only two worth buying at this point but there will be many more to come as he dominates Major League pitching. 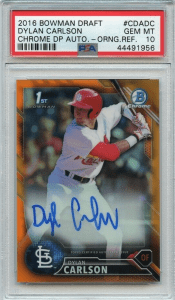 This is the must-have Carlson rookie card for investment purposes.

Numbered #CDADC and comes in a variety of parallels.

If the St, Louis Cardinals organization is right (which they usually are) this card will triple in value over the next few months). 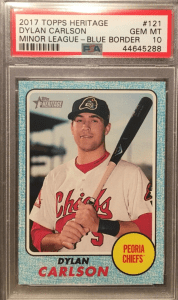 The 2017 Dylan Carlson Topps Heritage RC is the only other card on the market worth investing in at this time.

As time goes by and ore sets are released we will update and add more Dylan Carlson rookie cards to this list.

Please email us at value@goldcardauctions.com with a picture of the Carlson card in question.

As we mentioned above we are super high on Carlson and think buying his cards right now at current prices is an absolute steal! (compared to where they will be in August of this year).

Now we could be wrong and we have been wrong before… but we don’t think we will be.