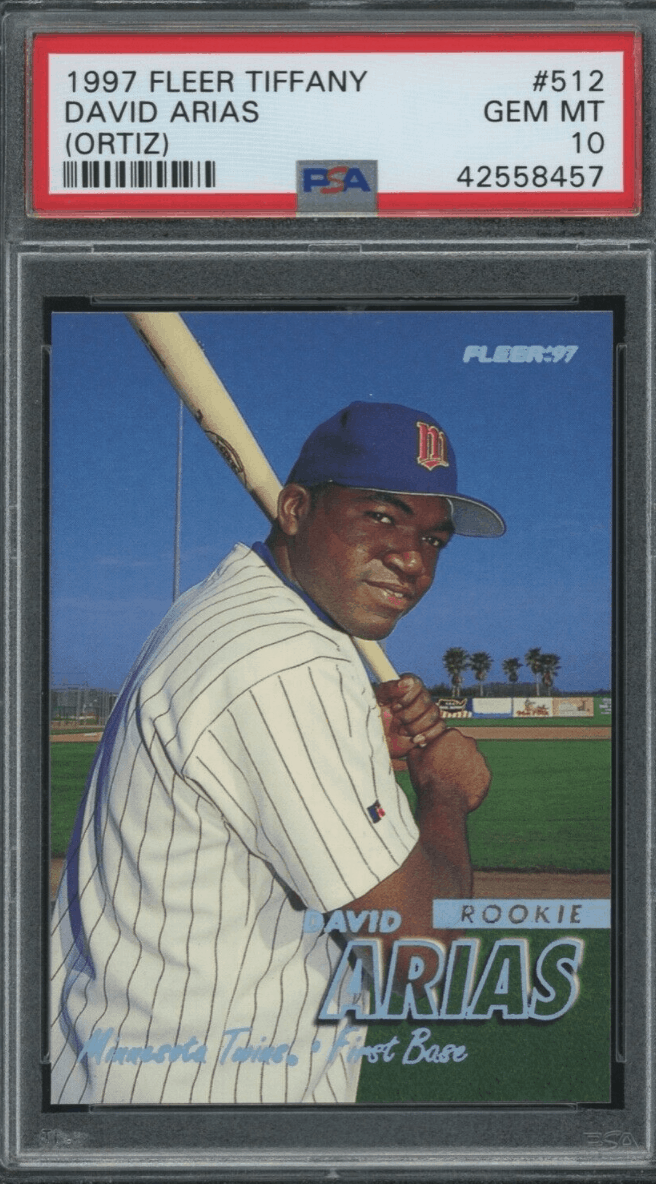 David “Big Papi” Ortiz (11/18/75) is a former designated hitter and first baseman who played for 20 seasons until his retirement in 2016. He won the World Series three times and is a 10-time All-Star and a World Series MVP.

Ortiz is currently ranked 17th in the all-time MLB Home Runs list, with 541 in total. The number could have been even higher, had he not spent five difficult years with the Minnesota Twins during his early career.

A clutch hitter with incredible power, Ortiz’s legacy was tainted slightly by accusations of steroid abuse, but he’s still one of the biggest names in the business and helped the Red Sox to their first World Series Championship in 86 years in 2004.

As well as a checklist and three popular David Ortiz rookie card options, we’ve prepared an investment outlook to give you a better idea of whether his cards are worth your time.

We’ve sifted through recent auction data to bring you a list with three of the best David Ortiz/Arias rookie cards to keep an eye out for. 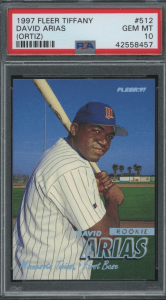 One of the best-known misprints of all time, the 1997 Fleer incorrectly names the player as ‘David Arias’. (It’s his real surname, but he prefers to go by Ortiz.)  The image shows him staring down the camera, with the bat in hand.

This along with the standard non-tiffany Ortiz rookie cards are our favorite for investment purposes and own around a dozen of them combined (and are looking to buy more when the price is right).

His most popular card in terms of bids, a PSA 10 will easily sell for $150. There’s also a rarer Tiffany parallel which is even more valuable. The quote on the back reads;

“One of the most feared sluggers in all of minor-league baseball last season, David’s eight intentional walks ranked third among Single-A players. The Twins are looking for his potent bat to eventually inflict damage in the Metrodome.” 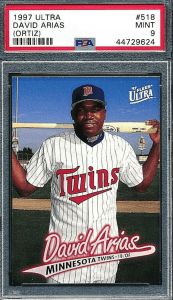 As with the other Fleer card listed above, the Ultra lists him as ‘David Arias’. Along with being produced on higher quality card stock compared to the normal Fleer, it comes with Gold Medallion and Platinum Medallion parallels.

As well as being rarer, the Gold and Platinum versions also have a different image on the front, as Ortiz props the bat over his shoulders. The reverse doesn’t concern itself with player info, opting for a list of batting stats, as well as another, different image of Ortiz in motion. 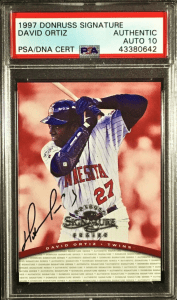 He might have missed the autograph box at the bottom with his signature, but at least the 1997 Donruss manages to get his name right. The image features Ortiz primed and ready to swing, with a colored background. Along with 3,900 red base cards, there are parallel versions including Millennium Green (1,000) and Century Blue (100). The quote on the reverse reads;

“A powerful left-handed hitter, David raced through the Twins system in 1997, beginning in Class-A Fort Myers and ending up on the Twins roster in September. After being called up, David batted .327in 15 games, which should give him a shot at the Twins’ first base job in ‘98. He hit .320 with 54 extra-base hits and 93 RBIs in Class-A Midwest League play”.

Maybe these cards will interest you…

Here’s a checklist with Ortiz’s rookie cards from 1997, along with a rare prospect option.

Ortiz was great until his final year in which he slugged a mind-blowing 38 homer runs and batted .315 top go along with a 127 RBIs… that is truly amazing as most great ballplayers fail at the end of their career and lose face to an extent (NOT ORTIZ!).

If you would like us to provide an estimate of your David Ortiz rookie card please email us as many pictures as you can to value@goldcardauctions.com (the more pictures the better).

Steroid accusations are one likely cause for prices being slightly lower than they could be, but he’s still a World Series MVP, and he’s the current holder of a number of different Red Sox records. It also means that there’s good scope for improvement in the future.

The majority of Ortiz’s most popular rookie cards might have misprinted his name, but they’re still highly collectible, especially for Red Sox fans.

His personal life is interesting, which should help to keep prices high. For example, Ortiz was shot in the torso following an alleged case of mistaken identity while at a bar in the Dominican Republic in 2019, so it’s not a stretch to say that he’s lucky to be alive.

David Ortiz Hall of Fame eligibility will be in 2022 and is an absolute lock to get in that year in our opinion and we would be stunned if he isn’t voted in (maybe even unanimously).

On a different note, he gave a passionate speech in Boston after they suffered a terrorist attack in 2013, which is one of many reasons why he’s so respected so highly. No self-respecting collector should miss out on owning a Big Papi rookie card or five!