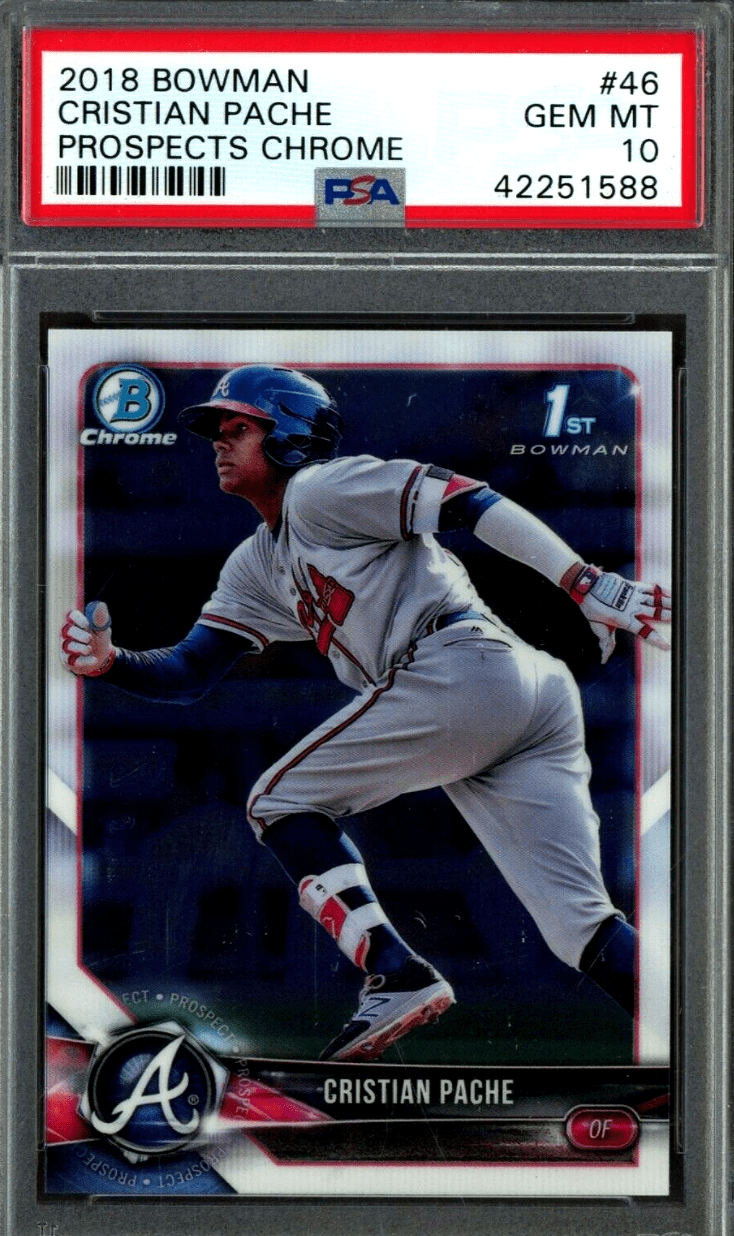 Cristian Pache (11/19/1998) signed with the Atlanta Braves on a hot summer day in July of 2015 for $1.4 million (cha-ching) and he has done a pretty good job destroying minor league pitching ever since.

Through his 4 seasons of minor league ball, he has batted .283 to go along with 21 jacks and 171 RBI’s… he has shown some decent wheels as well swiping 58 bags (he might be faster than the orange car on RC Pro-AM!).

On top of his already impressive offensive resume, he piles on a cannon of an arm, in fact, many consider him to be the best defensive player in minor league baseball and are predicting MULTIPLE gold gloves in the majors.

Check out some of his highlights from Minor League ball below and see for yourself why this kid is ranked the 13th best prospect in the game!

WHOA! We knew he was good at the plate but we had no clue he had the ability to throw the ball into a home like a guided missile… he has gotten so good opposing players have just stopped running on him.

So obviously this kid deserves to be around the top 10 in the MLB prospect pipeline… let’s check out his best rookie cards released per date. 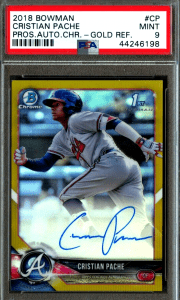 Numbered #46 (refractor parallels will have a different number) and shows Pache moving quickly out of the batter’s box after knocking the ball down the third baseline. 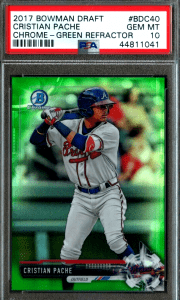 Another solid Pache Bowman Chrome rookie card that takes back seat to the 2018 card.

Numbered #BDC40 the card shows Pache at the plate looking for a base knock at a minimum and hopefully a jack if the pitch is right.

The reverse of the card reads the same as the 2018 Bowman Pache card mentioned above. 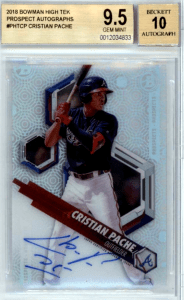 For now, this is our third ranked Cristian Pache rookie card and is actually a pretty cool looking card for a High Tek card… not only does it have an autograph but it’s available in some pretty cool parallels.

Good offense and great defense will take you a long way in baseball and this kid has both with the ceiling to become a great offensive threat.

If you have any Cristian Pache baseball cards you would like an estimated value on please email us at value@goldcardauctions.com (include 2 pictures at minimum) or hit is up on the Gold Card Auction Twitter Page.

Pache very well could be the next Braves rookie to emerge from their years of tanking. He has the bat and defense to be an All-Star at the next level… his defense alone should earn him a starting everyday position in the league sooner rather than later.

Now we don’t feel he is on the level of Wander Franco good but we do like him as a short to mid-term investment and have bought a few of his 2018 Bowman Chrome cards at higher grades with auto.

Buying a few of his 2018 higher-end Bowman Chrome Prospect rookie card and holding until his call-up is imminent is a smart play…. then the question is sell on call up news or hold and see if he can produce… risk-reward decision.

We have said throughout this article that we prefer the 2018 Bowman rookie card but the other two should have positives ROI’s as well.

Please check back in a few months when more Pache rookie cards are released (in particular Topps).