Clayton Kershaw rookie cards are some of the highest valued cards for a pitcher in his generation.

There are only two pitchers of his generation that can even come close to competing with his rookie cards in terms of value; Madison Bumgarner & Max Scherzer rookie cards and some may even consider that a stretch… at any rate keep rearing to learn which Kershaw rookie cards are worth your time! 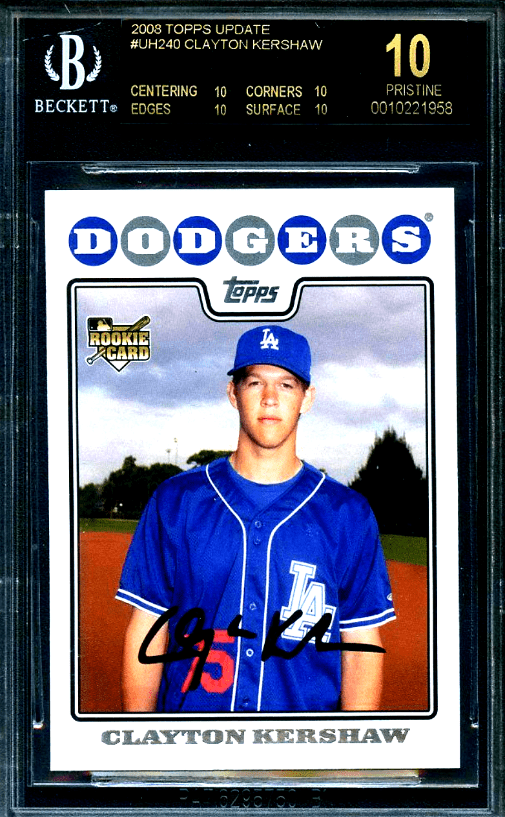 Clayton Kershaw was born on 3/19/1988 in Dallas, TX, and was picked number 7 overall by the Los Angeles Dodgers in the 2006 MLB June Amateur Draft (not a bad pick eh).

Kershaw is considered one of the best pitchers of his generation (if not the best) and had a mind-blowing 301 strikeouts to go along with a filthy 2.13 ERA in 2015 (that is more than the legendary Roger Clemens ever had in a single season).

Needless to say, owning a couple of his rookie cards will be a good thing long term… especially if he can ever collect that World Series Win. 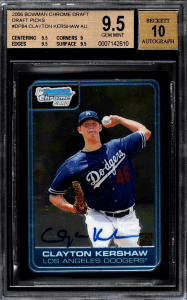 This is definitely one of the Clayton rookie cards you will want if you decide to invest.

The 2006 Clayton Kershaw Bowman Chrome Draft Autograph Rookie Card comes in a variety of parrels and is numbered #DP84.

You might have trouble finding them on eBay as they are not always 100% available via auction BUT if you keep checking back one will eventually pop up (just be prepared to pay depending on the parallel). 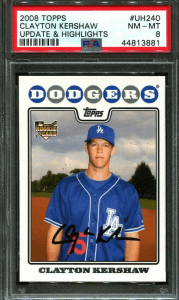 The Topps Update is another nice looking Kershaw rookie card we have tucked away in our arsenal.

Numbered #UH240 the card shows a babyface Kershaw looking back at the collector with a goonish look on his face that seems to say pass me the chronic yo.

The back of the card reads “Clayton garnered Gatorade National Player of the Year honors in 2006 when he struck out 139 batters in 64 innings at Highland Park High School in Dallas, TX“.

Get money bruh, get money… 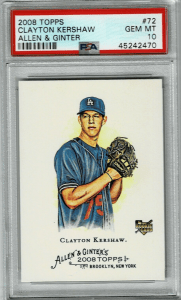 Here is a Kershaw rookie card that is not only very available but also very cheap (relatively speaking).

The 2008 Topps Allen & Ginter Clayton Kershaw Rookie Card is a great option for the collector with a smaller budget not looking to spend hundreds on a Kershaw RC.

Read: Why Investing In Sports Cards Gives You Double The Return Compared To The Stock Market

below our the top Kershaw rookie cards in terms of value…

Most of his rookie cards are still pretty cheap considering he is the best of his generation.

If he wins a World Series Ring his rookie card prices would soar overnight (similar to Mahomes winning the Superbowl).

If you would like an estimate on any of the Kershaw RC’s you have please email us at cardvalue@goldcardauctions.com (include pictures if possible).

Clayton Kershaw rookie cards should be a solid rookie card investment option for years to come… in fact, you might be able to pick some up on the cheap as he ends his career and his numbers fade.

We have a couple of Kershaw rookie cards in our investment portfolio and have no problem with you doing the same… just don’t go overboard and stick with the Bowman Chrome or Topps AG RC.