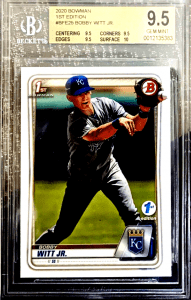 Bobby Witt Jr. (14/6/00) is a shortstop who was the second overall pick in the 2019 MLB draft. Witt Jr. has been named as the best pure hitting prospect in MLB, with few obvious weaknesses to speak of.

As the son of former MLB pitcher Bobby Witt, he has a lot to live up to, especially as his father was the Texas Rangers’ first-round pick in the 1985 draft.

Witt Jr. has a range of interesting rookie cards, so here are three of the best options on the market, along with an investment outlook as the prospect aims to become the centerpiece for his franchise.

We’ve combed through recent auction data to bring you a list with three of the best Bobby Witt Jr. rookie cards. 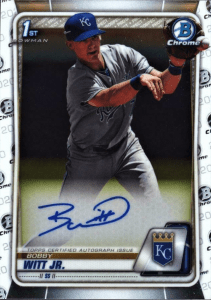 Witt Jr’s Bowman Chrome Prospect Autograph features a great action shot, as he prepares to catch a baseball in a gloved hand. Already valued highly by collectors, there’s a ‘1st Bowman’ logo in the top left corner, and a KC Royals insignia found at the bottom.

The on-card signature and the power of the Bowman brand is enough to make it one of the best early Witt Jr. options, and there’s increased interest as it’s his first hard-signed MLB-licensed card. You’ll also be able to find the following parallels: 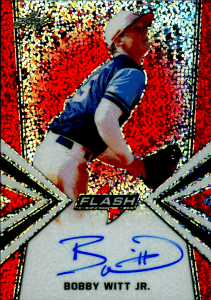 Leaf released a range of their Metal cards in 2019, featuring a Flash logo located across the middle.

It’s an autographed card that is sure to get your attention thanks to a sparkly design and a strong aesthetic, with Witt Jr. gazing up at the sky as he prepares to make a catch.

Some early Leaf cards retain their value well, while the addition of the signature allows it to fare better than most as an investment piece.

It’s also more affordable than the 2020 Bowman Chrome, with a number of basic parallels that are reasonably rare. 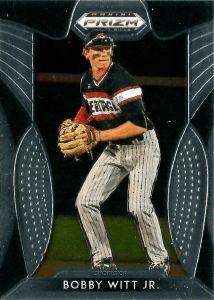 Witt Jr’s Panini Prizm Draft Picks card is another coveted prospect option, showing the player representing the USA Baseball U-18 National Team with bat in hand. As with all Prizm cards, it comes with a range of different images and borders depending on the version you’re looking at.

There’s an autograph located at the bottom which further increases the overall value, and it comes with an extensive range of Prizm parallels: 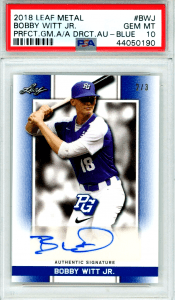 Bobby Witt Jr. rookie cards are all over the place in terms of value… you can pick some up for a few bucks while others (the one below for example) will go for a couple thousand. 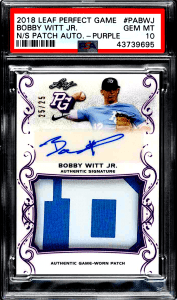 Seen as a top prospect when he was drafted second overall in 2019, Witt Jr. made his professional debut with the Arizona League Royals in the same year.

He may have failed to live up to the ridiculous hype in 2019, but he still has time on his side given his age and his potential.

Of course, we can never be sure, no matter the perceived talents of the ‘next big thing’.

Witt Jr. will only be 20 when his next birthday comes up in June, but his rookie cards have already begun to creep up in value midway through 2020, especially after the release of the Bowman branded MLB versions.

The 2020 minor league seems certain to be shortened, while he won’t be thrown into the big leagues without gaining more experience in the meantime.

It’s a great time to grab his cards before they become overinflated as every collector and the would-be investor will soon be circling in an attempt to get in on a piece of the action.

Ownership Disclosure: We do not currently own any Bobby Witt Jr. Rookie Cards

CTA – Witt Jr’s prospects are some of the most exciting MLB cards to release in the last few years, but will they make our list of the best sports cards to buy right now? Let us know if you’re planning on grabbing a Witt Jr. card or two in the comments section below!