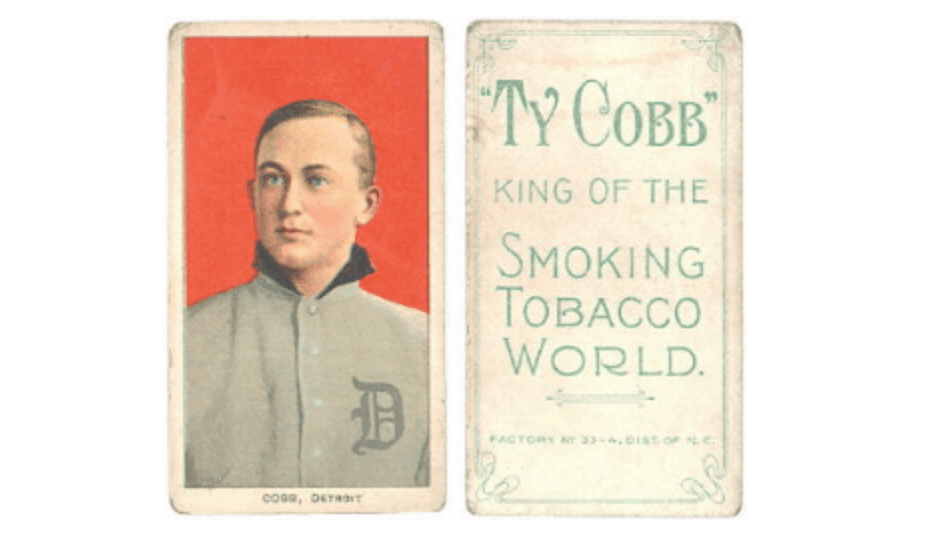 Here, we will discuss the best sports cards on which to invest your hard-earned money.

We cannot guarantee a positive return (as an aside – always be skeptical of someone who does!) but we are very confident in our picks and sleep soundly at night.

Without further ado, here are the must-have cards for investment purposes. 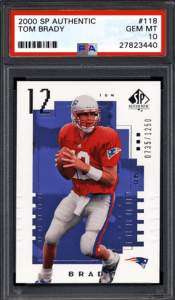 This card is the GOAT of Tom Brady rookie cards and is one of our favorite (if not our best pick) for long-term card investing.

It is numbered #118 and has a print run of only 1,250 copies. This card is on another level, combining rarity and artistic appeal. 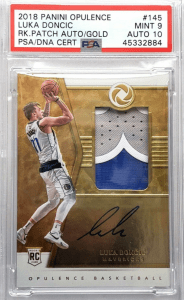 We have not seen anything like Luka or these Panini Gold Opulence cards in awhile. Both are unique one of kind gems.

The 2018 Panini Opulence Luka Doncic Gold Patch Auto Rookie Card is a thing of beauty and in our opinion is the best looking card ever created.

On top of the card beauty, Luka truly has it all and we would be SHOCKED not to see him walking around with multiple NBA Championship Rings and MVP awards 15 years from now. 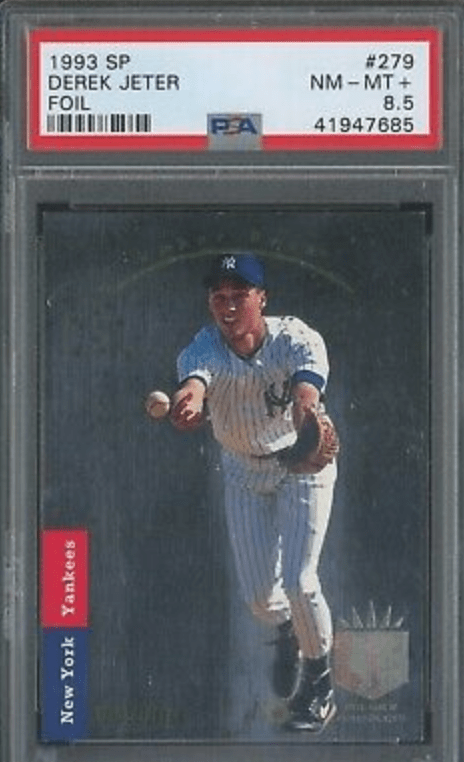 We love love LOVE this card as a short term investment due to the likely price break out once he is elected into the Baseball Hall of Fame.

The MLB HOF introducee ceremony will take place in July of 2020.

The back of the card reads “The first high school player has taken (and the sixth overall selection) in the 1992 draft, Jeter hit a .324 clip for Class-A Greensboro in the first half of 1993.” 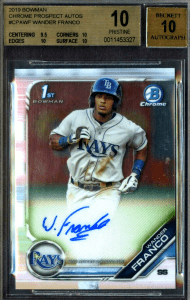 Here is a solid SOLID prospect card for those wanting to get on the Wander Franco HYPE train.

Were buying this card in all parallels. 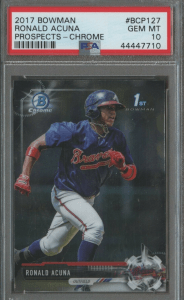 We absolutely LOVE this Acuna Jr. card for the next 10 years.

Sure, he can be a little flashy but the talent is right up there with Mr. Trout.

Not only can Ronald Acuna Jr. blast the ball out of the park (great power), he also hits for a high average and even has a good deal of speed – very Trout-like!

We like his 2017 Bowman Chrome card as a great long term investment (Chrome base and Refractors). 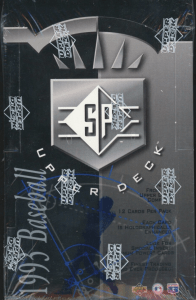 We recommend this one, as you have the chance to walk away with the 1993 Derek Jeter SP Rookie Card!

We have bought 4 of these and pulled 4 Jeters total.

One box had two, two boxes had one, and one box had zero. 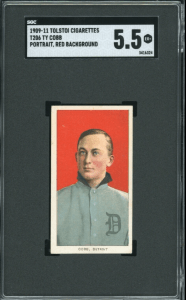 Ty Cobb T206 cards are an excellent investment and should steadily rise year in and year out. The red and green backgrounds are some of the more popular versions and are a MUST for all collectors. 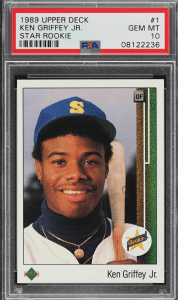 This a true no-brainer.  This is an iconic card to millions of kids who came to age in the late 1980s and early 1990s.

It’s the signature card of an era when the hobby reached its highest highs. We have seen the card steadily climb in value every year since we started tracking it. 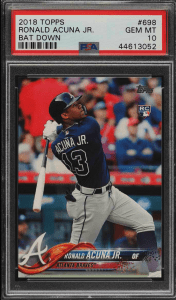 This card may very well end up as the most popular Acuna rookie card.

Numbered #698 this card has exploded in value and is quickly becoming a must-have for Ronald Acuna Jr. collectors.

The card is an error as the normal card has the bat pointing up.

We love this card and actually prefer this over the Acuna 2017 Bowman Chrome card. 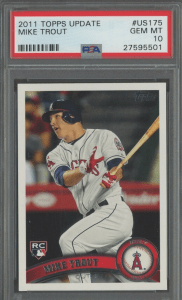 This is the most iconic card since the 1989 Ken Griffey Jr. Upper Deck card in our opinion and the price jump over the last few years reflect that.

When we first started this blog, the Mike Trout Topps Update Rookie Card PSA 10 was going for $400 to $500.

The iconic Ty Cobb “bat off shoulder” T206 card is another great long term play. We love the multi-color background and his stone-cold stare off into the distance. 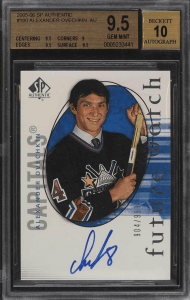 This is the only hockey card on this list (for now) and is a must-have for long term investors in this hobby.

In our opinion, Ovie is already the best player to ever lace up the skates in our opinion and is a scoring machine even in the “dead puck era” (imagine what he would have done in the ’80s and ’90s).

The 2005 SP Authentic Alexander Ovechkin Rookie Card will cost more than 2k but is worth the price long term as this card will only go up over the years.

The card is numbered #190 and the back reads “The top overall pick in 2004, Ovechkin can play both the physical and the finesse games, blending blazing speed with a 212-pound frame” 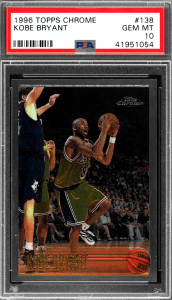 Not only is it an absolutely gorgeous card but it should be an ROI beast over the next few years especially if a Kobe documentary similar to the Michael Jordan doc is released… the value of this card will blast off! 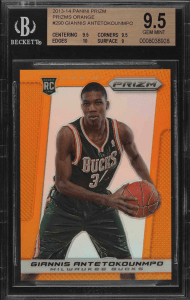 The Giannis Antetokounmpo Prizm Rookie Card is a sick card and is one to own for the next 10 years.

We like the Panini Prizm Orange but it is hard to find, not to mention it will set you back a pretty penny!

The Giannis Antetokounmpo Prizm Base is a good bet for most investors.

We would not be surprised to see three or four more MVPs from Mr. Antetokounmpo although Luka may have something to say about this in the future. 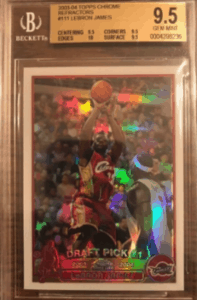 Every collector in this hobby should 100% have this card in their investment portfolio.

The 2003 Lebron James Topps Chrome Rookie Card is on fire and the ROI in the last few years is really disturbing unless you owned a few of these cards back then. 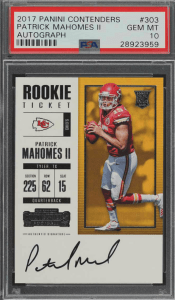 Mr. Mahomes may be ushering in a new era in football – out with the old (Tom Brady) and in with the new (Patrick Mahomes)!

We fully expect Mahomes to win at minimum one more Superbowl and maybe even run a string of them together and move the dynasty West to Kansas City (bye-bye New England).

All of Mahomes rookie cards are great investments but we particularly like the Panini Contenders Rookie Ticket and feel as though this one has the greatest ROI relative to his super expensive rookie cards. 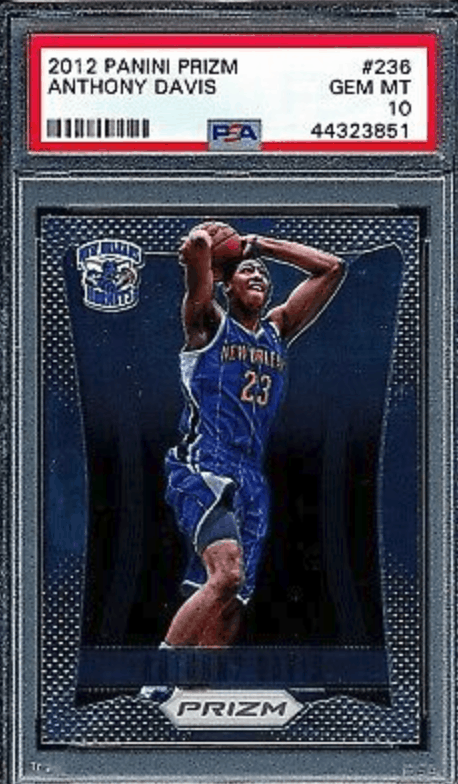 We love this card as a short-term investment as we are all in on the Lakers winning the NBA title next year.

Even if the Lakers fail to win it all the Anthony Davis Panini Prizm Rookie Card should still increase drastically in value plus there’s a decent chance Mr. Davis could win the NBA MVP. 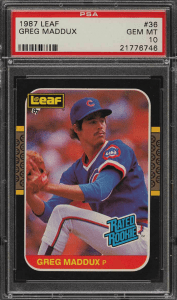 We really like this Maddux Rookie Card for a few reasons the number one being the Stache! A young, baby face Maddux with a mustache beyond awesome.

Second when was the last time you remember seeing Leaf mentioned with one of the best baseball cards… never.

Third, we have always loved that light blue “rated rookie” icon printed on the bottom of the card.

On top of all that this card is super cheap when compared to the rest of the cards on this list (for now). Currently, you can get this card in PSA 10 for around $230/240. 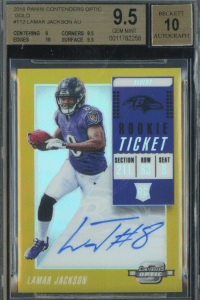 The NFL has not seen anything like Lamar Jackson, “aka Smiley Face”, in a long, LONG time.

Not only can he chuck the rock downfield with the best of them, he also has the uncanny ability to make guys miss tackles in the backfield, and now he is gone for a 45-50 yard scramble.

We absolutely love his 2018 Contender “Ticket” cards as a great investment that could easily double if the Ravens go on to win the Super Bowl.

If the Ravens can someday win the Super Bowl and Lamar Jackson is awarded MVP… LOOK OUT!

If we only had one card to invest to earn maximum profits it would have to be Luka Doncic rookie cards.

Combine the up and coming popularity of the NBA with a 20-year-old who appeals to a worldwide audience and you have the best modern card investment in the industry.

If Luka goes on to win a few NBA Championships and League MVP’s in the next 10 years… lookout! Were talking Trout-like prices for his rookie cards. 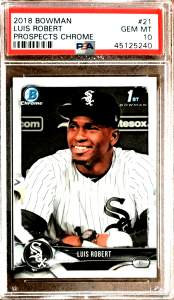 Right now we are buying the following baseball cards…

Right now we are buying the following basketball cards…

We’re leaving Zion Willamson rookie cards off this list for now for two reasons; one, his cards are already valued at sky-high prices and two, nagging injury concerns… but feel free to check out this Zion best rookie card video…

Right now we are buying the following football cards…

Right now we are buying the following hockey cards…

If you have any concerns or are nervous in regards to buying an expensive card ($1,000 or more) feel free to contact us at advice@goldcardauctions.com to get a second opinion on the purchase 🙂

If you have any general questions in regards to sports card investing please do not hesitate to reach out to us at info@goldcardauctions.com.

Card Grading: Before you get a card graded please read PSA Grading vs BGS Grading vs SGC Grading

We will email you back within 24 hours or even call you on the phone if you would like (just leave your phone number and good call time).