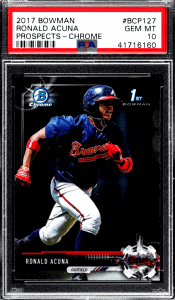 He staggered out of the gate and had a slow first few months in the league but once he found his footing he hasn’t looked back!

He also helped lead the Braves to the National League East crown and an appearance in the 2019 postseason but were beat by the St. Louis Cardinals in a dreadful Game 5 loss at home…. don’t worry HOTLANTA he will be back in the postseason sooner rather than later.

Acuna Jr. is truly one of the most exciting young players in the Majors and will be for a long time to come.

Let’s take a look at the best Ronald Acuna rookie cards on the market today from an investment standpoint.

If you are looking for the ultimate Ronald Acuna rookie card, look no further than the 2017 Bowman Chrome Prospects Ronald Acuna ROOKIE RC #BCP127.

Plus this card is still VERY affordable in its basic form.

The card features Acuna in a Braves Spring Training uniform running the bases.

The refractor versions will fetch megabucks and is a great long term investment in our opinion. 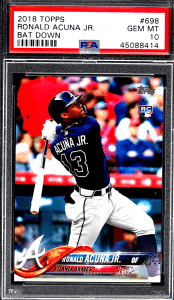 Don’t expect to pull the 2018 Topps Series 2 Ronald Acuna Jr Bat Down SSP Variation from a box as it is a super short print.

The best way to ensure ownership of the 2018 Topps Series 2 Ronald Acuna Jr Bat Down SSP Variation Rookie Card is.

Expect to pay in the 4 digits for the Acuna bat down error version (we love, LOVE this card as a great long term investment). 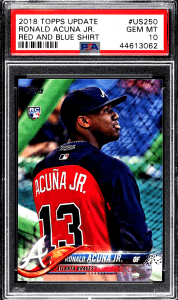 This is one sick card!

Numbered #US250 this Acuna Jr. rookie card shows him waiting to get some batting practice in pre-game… his batting practice is a smoke show as we have seen a dozen or so of them and it’s worth getting to the game earlier to watch. 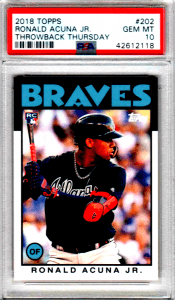 We love the 1986 Topps Baseball Card Set and especially love seeing Acuna Jr. on the card… it brings back memories of a carefree time when living with easy and soda was free.

We love this Acuna Jr. Throwback rookie card and it’s too bad this card does not have an SSP version as the price would be through the roof!

You will not find very many of these cards at auction at high-grades but when you do we suggest snatching it up… for a reasonable price of course.

Numbered #202 the card shows Acuna laser-focused and ready to launch. 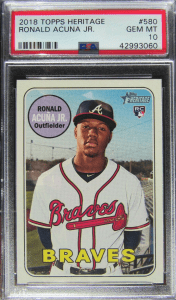 The card pictures an unconcerned Acuna with his hands behind his back.

Plus the 2018 Topps Heritage Ronald Acuna Jr. is very affordable and is a great starter card for new collectors.

The card is numbered #580 and reads “Baseball America’s 2017 Minor League Player of the Year choice, Ronald took MVP honors in the Arizona Fall League after hitting .325.

Acuna Jr. rookie cards have skyrocketed in value over the last few months…in particular, the Acuna Topps Bats Down Error Card has exploded going from $500 to over $2000 in just a few months.

His most expensive rookie cards are the 2017 Bowman Chrome Refractors… you will need to come loaded for bear if you want one of those bad boys… we love the blue auto. 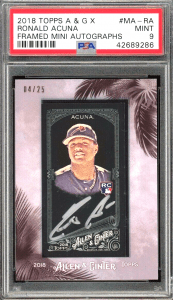 This kid is going to be a stud for years and years to come. Plus the Braves are LOADED with young talent and as such we would not be surprised to see Acuna with a World Series ring in the future and most likely an MVP award (if not multiple).

Not only can Acuna Jr. RAKE but he also has a hell of a glove and has a good chance to win more than a handful of Gold Gloves.

We think he has an outside chance of becoming just as good or maybe even a better player than the legendary Mike Trout!