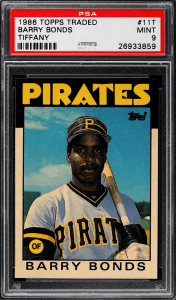 Most enthusiasts regard the 1980s as a time of substantial growth for not only the sport of baseball but also for the hobby of card collecting. During this period, many new collectors were lured in by a wave of fresh and innovative players, as well as the potential to make a sizeable profit.

The 1980s enjoyed a surge of rare and valuable rookie cards that were the crown jewels for many avid collectors. Some have stood the test of time, while others have faded into obscurity on the secondary market.

For many collectors, the 1980s were a golden age of card collecting. The decade began as a desolate wasteland, with just one card producer, Topps, and only one significant set per year. Things were looking bleak for the hobby as a whole.

By the end of the decade, the market ballooned to five major card makers and a myriad of issues by the year 1989.

Card collecting was reborn, and the hobby gained in popularity. Along with it, card values both old and new soared as new collectors entered the market.

However, like most trends that were born in the 80s, the party couldn’t last forever, and the bubble burst. The cardboard mountain crumbled, and many dreams of sports cars and early retirement crumbled along with it.

Nevertheless, unlike spandex, most collectors kept their cards, and an exciting thing happened. Many of the original collectors found that once they were settled in life, they still enjoyed the hobby and returned to collecting. Countless collectors returned to the market and many of theses prized 80s cards regained their value.

So which of these 80s superstars is most valuable?

Let’s take a look at the top 3 cards from the Decade of Decadence.

Top 3 Baseball Cards From the 80s 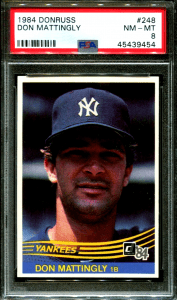 Donald “Don” Mattingly, is known for holding the record for the most grand slams (he hit 6) in a single season, set in 1987. Interestingly enough, he had not hit any grand slams, before or after this unimaginable season. Mattingly was drafted to the New York Yankees in the 1979 MLB draft, then made his rookie debut in the fall of 1982.

Distinction: The hefty value of this card speaks for itself. It is one of the most famously coveted cards in history.

Collectors are likely to pay handsomely if they are lucky enough to come across a PSA 10 condition.

This card is one of the rare finds that helped launch the rookie card craze among hobbyists. The design and layout of the ‘84 Donruss series may seem dull, but the color scheme and iconic photography made this card an instant classic.

Out of all of Don Mattingly’s rookie cards, this is the only edition to list his position as merely a first baseman rather than outfielder and first baseman.

The back of the card is iconic as well. It makes use of a simple horizontal layout which lists his career highlights, and league stats. It also gives a quick bio about Don’s meteoric rise up through the minors to become a staple to the Yankee’s roster. It is almost unbelievable that this future legend was picked in the 19th round of the draft.

Although quality control for this card was relatively decent, most collectors have a hard time finding a card that is perfectly centered. Finding a perfectly centered front and back is the biggest issue standing in the way of a PSA 10 rating.

Born July 24, 1964, Barry Lamar Bonds made baseball history when smashed Hank Aaron’s record of a towering 755 home runs in 2007. Bonds began his MLB career with the Pitsburg Pirates in ‘86. Bonds was no stranger to controversy and was indicted on charges of perjury in the major league steroids scandal.

Distinction: This card might not be the most expensive Bonds’ card available, but the 1986 Topps is most certainly his most famous rookie card. The design itself is not only instantly recognizable, but it is also iconic among collectors. The bright yellow “Pirates” lettering blends with the striped cap that Bonds was sporting to create an aesthetically pleasing and memorable design. In mint or top condition, this card can easily fetch some decent cash, to the right buyer.

Collectors often regard this card as the most visually attractive card in the set and certainly the most memorable. The retro lettering and jersey give this design some 80s pop and make for an instantly recognizable piece of history.

If it were not for the unfortunate PED scandal, Bonds would have entered the annals of history as one of the best players ever to play the game. Undoubtedly, he would have been a hall of Famer, and there is no telling where the value of this card could have ended up. 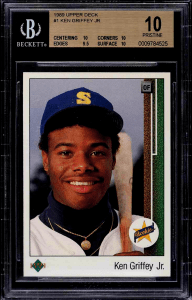 Ken Griffey Jr., also known as “the Kid,” was born on November 21, 1969, and completed 22 legendary years in professional baseball. Most of his career was spent with either the Seattle Mariners or the Cincinnati Reds, and he even played a short spell with the Chicago White Sox.

Not only was Griffey Jr. a record 13-time All-start, but he was also one of the game’s most prolific and sensational home run hitters. He finished his career with 630 home runs and 10 Gold Glove Awards.

Distinction: There is no denying the fact that the 1989 Upper Deck card was a complete game-changer for the hobby of card collecting. When Upper Deck entered the scene, they pushed the limits and broke the mold. They made a fantastic decision by backing Griffey Jr. for their #1 card.

Upper Deck made headlines for shaping baseball cards into a premium and quality product. Their Griffey Jr. card was not only the first card in Upper Deck’s official set, but it was also one of the most collectible and iconic cards ever created.

It’s true that these cards were perhaps overproduced and don’t currently hold the value they once did, but that does not make this card any less iconic. Among all of the Ken Griffey Jr. cards ever manufactured, this card is by far a clear favorite.

Without a doubt, there are many more valuable cards out there, but the importance of this card cannot be understated. This card represented the pinnacle of the card collecting era and helped turn this hobby into a passion for many people.

In the world of card collecting, there are far more valuable cards out there. However, few define the hobby quite like the three iconic and memorable items on this list. They not only established a decade but rekindled a love of the game for a whole new generation.