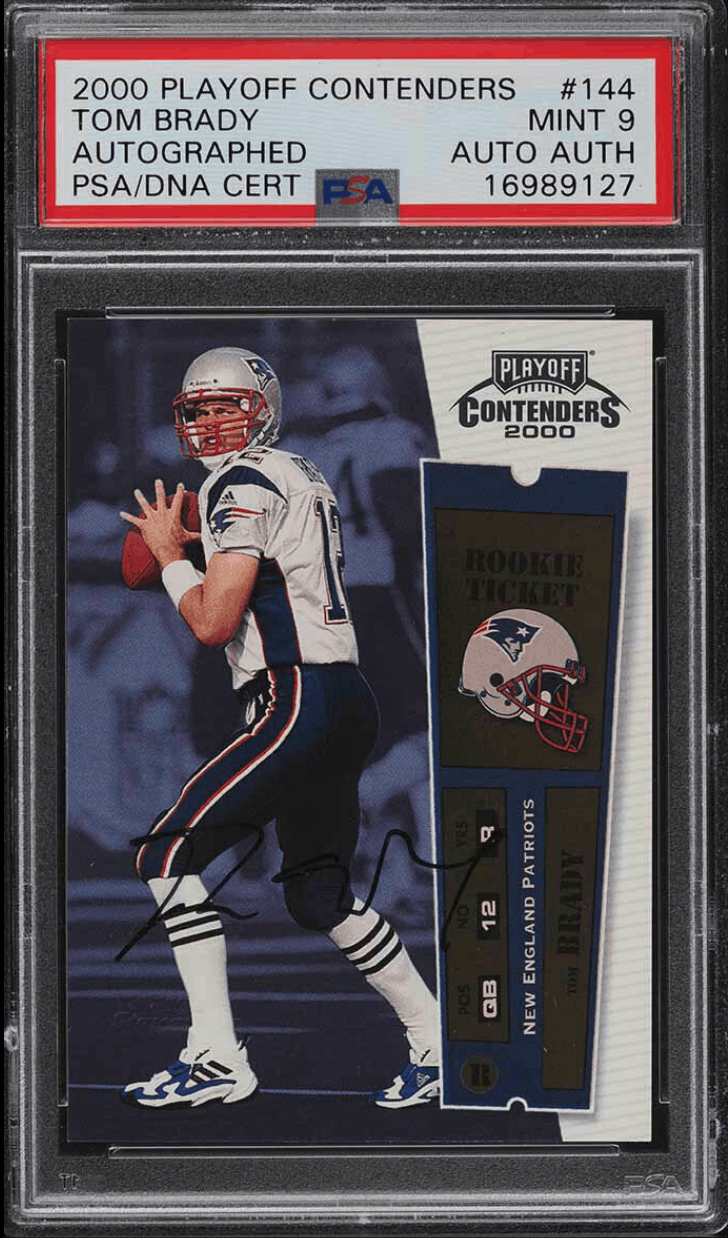 Autograph sports cards are some of the most popular buys on eBay. Timelessly, most bids found on rookie cards are those that have an autograph. We have many friends that only purchase cards with an autograph and won’t deal with anything less. Having said that, we have listed the best autograph cards in the hobby.

It should be noted these cards will cost more than a brand new BMW but are worth the money if you can afford it from an investment standpoint.

We have also listed a few affordable options for collectors who don’t have tens of thousands of dollars to spend on a baseball card.

Without further ado, here are the best autograph rookie cards of all-time. 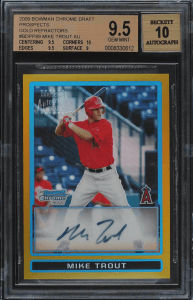 The Trout Chrome Refractor Auto card is a white whale for many collectors and will only be obtained by a few of the lucky ones.

This honey of a card will cost in the 6 digits and features Trout at the plate waiting on the ball to take out of the park. 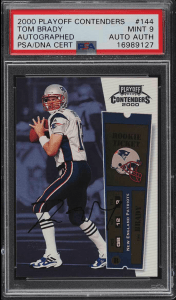 The 2000 Tom Brady Playoff Contenders Auto Card is the Holy Grail of Tom Brady rookie cards and the price reflects that.

Numbered #144 the card features Brady in the pocket looking for an open wide out. 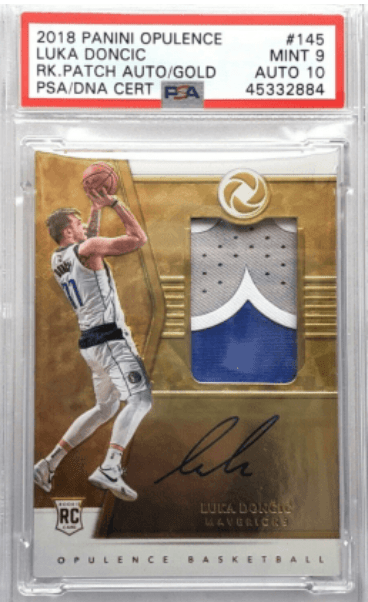 As we have mentioned before, we are absolutely in love with this card. It is pure DRIP (slang version… Google it 🙂 ). From the form of the classic Luka jump shot to the beautiful gold color to the autograph and patch… it’s a true masterpiece of a card and cost MUCH less than its comparable National Treasure card.

This Luka Doncic rookie card is Numbered #145 and only 10 of them were printed. 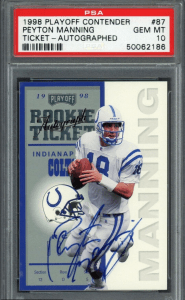 This list would not be complete without an autographed card from the Sheriff.

The 1998 Peyton Manning Playoff Contender Ticket Rookie Auto card is not at the expense level of the Tom Brady card mentioned above but is darn close.

Numbered #87 the card shows Manning scanning the field for an open wide-out or tight end.

Mahomes is not at the level of a Brady or Manning (yet) but that could easily change in the next decade. It might be harder for him to run down Captain America, but catching up with Peyton is a possibility (MAYBE). 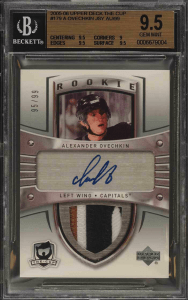 Ovie is our favorite hockey player of all-time and could be the most prolific scorer the league has ever seen (Brett Hull and Super Mario are up there).

Although hockey cards do not make up a huge percent of our investment portfolio (around 15% of our cards are hockey) we do have a nice stock of Alexander Ovechkin rookie cards.

The 2005 Alexander Ovechkin UD The Cup Autograph rookie card is numbered #179 and displays a small head-shot of Ovi along with his autograph and a patch. To be honest, there is something about its simplistic nature that we love and sets it apart from other high-end autographed rookie cards. 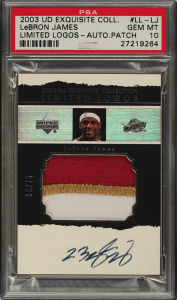 We are not a huge fan of LeBron by any means but we respect his game. In our eyes James is a bit too controversial politically and seems to whine when things don’t go his way… just play ball man.

At any rate, we do feel there is immense value in his 2003 Exquisite Collection Limited RC. The card is numbered #LL-LJ and is similar to the Ovie card as it simply shows a head-shot of King James along with his signature and a game-worn patch.

Here are a few options for collectors who don’t swerve around in a Mercedes Benz alongside their houses in Aspen and South Beach. 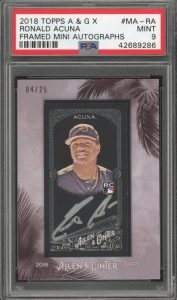 We recently purchased this card and are in love with the unique feel to the card. The card is numbered #MA-RA and has an odd border consisting of palm trees?

Produced by Allen & Ginter the card also has an appealing black and tan image to go along with a silver autograph… everything about this card screams eye candy to us (some might disagree but we love it!). 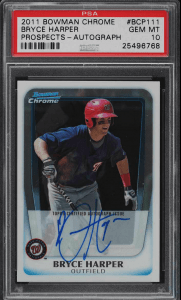 An extremely undervalued card if Harper can put together a few seasons similar to the one he had in 2015. This is easier said than done obviously but we truly believe he has it in him and are betting on him to do it (or at least come close to that stat line). 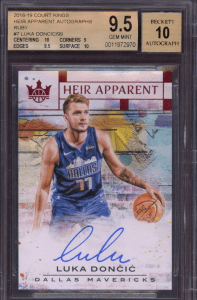 Another sick Luka auto card that won’t cost you an arm and a leg.

This card is numbered #7 and has that eye-candy look to it. We love the color scheme and like we said the card can be had for 4 digits (instead of 6).

Well, there you have it.

Those are some of the best sports cards money can buy.

If you can manage to land just one of them during the course of your lifetime you are doing very well.

If we could only pick one we would go with the Mike Trout Gold Refractor Bowman Chrome card (baseball is our favorite sport and we believe Trout is the best sports player in the last 50 years… yes better than MJ… he just happens to belong to one of the worse organizations in the history of the game).