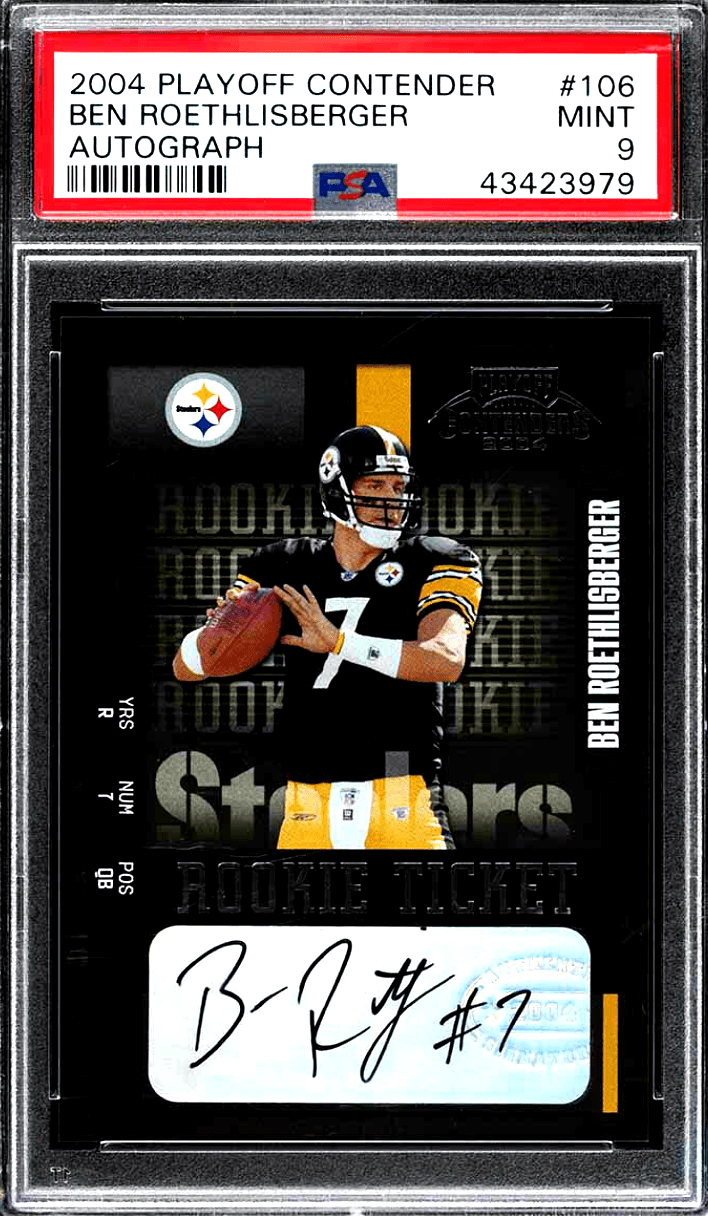 Ben Roethlisberger (03/02/82) is a quarterback who has played for the Pittsburgh Steelers since joining the team as a first-round draft pick (11th overall) in 2004. Known for his efficient passing, he led the team to two Super Bowl wins and has made six Pro Bowl appearances over the years.

With 15 seasons at the top, he holds multiple franchise records, as well as NFL equivalents including the longest regular-season win streak to start a career for an NFL QB.

We’ve looked through recent auction data to bring you a list with three top Ben Roethlisberger rookie cards, as well as an investment outlook as he enters the twilight of his playing career.

Roethlisberger has almost 50 rookie cards that will appeal to almost every budget. Given the amount of choice on offer, we’ve identified three of the best options overall. 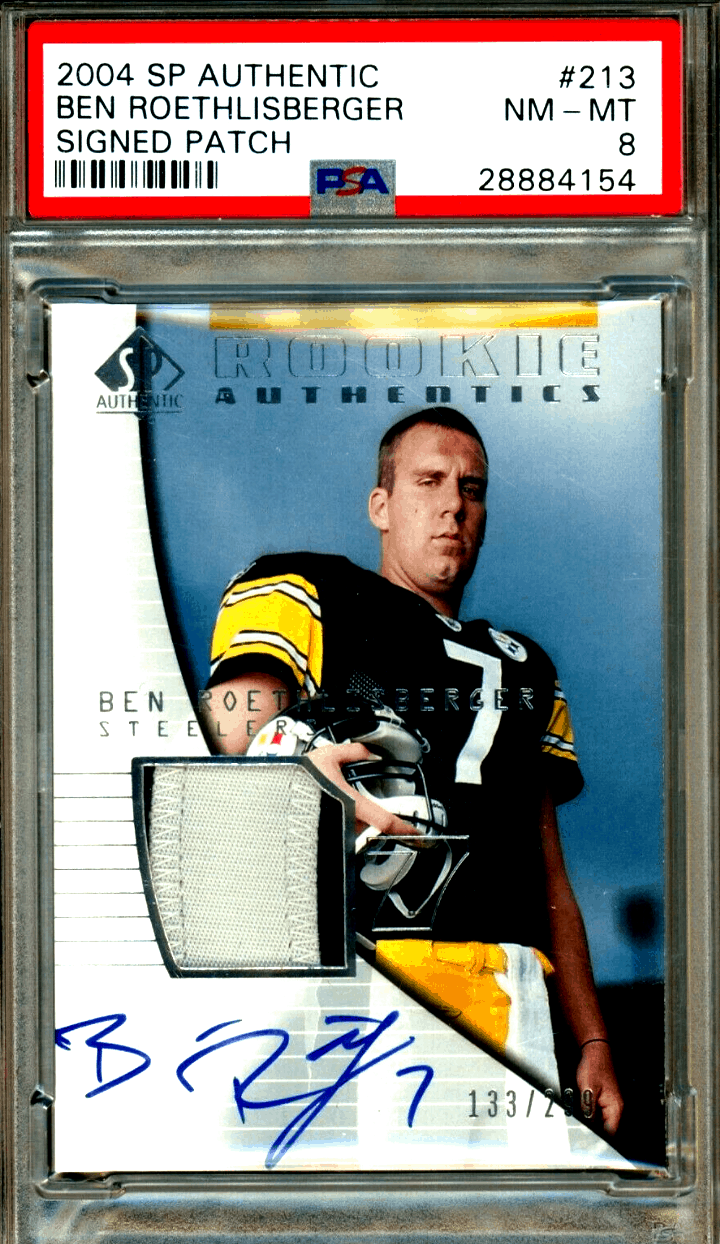 The 2004 SP Authentic is probably his best premium RC, with a large image of Roethlisberger staring down at the camera. As well as a small player patch and an on-card autograph, it’s serial-numbered to 299. You can check the number at the bottom of the card.

One of the best options available, and an RC that is sure to receive multiple bids at the auction, you’ll be hard-pressed to find a better investment piece. However, you will have to make sure that the swatch hasn’t been swapped out, so it’s worth going for a graded version.

Coming from the 2004 Playoff Contenders set, this card also contains a Roethlisberger autograph which is highly attractive for collectors. Black and yellow to match his kit, it matches the design of current day Rookie Tickets. Best of all, it’s hand-signed by the man himself.

One small flaw is the lack of a serial number, despite the print run being confirmed at 541. It’s not the smallest amount by any means, but it’s rare enough to make it another interesting prospect. 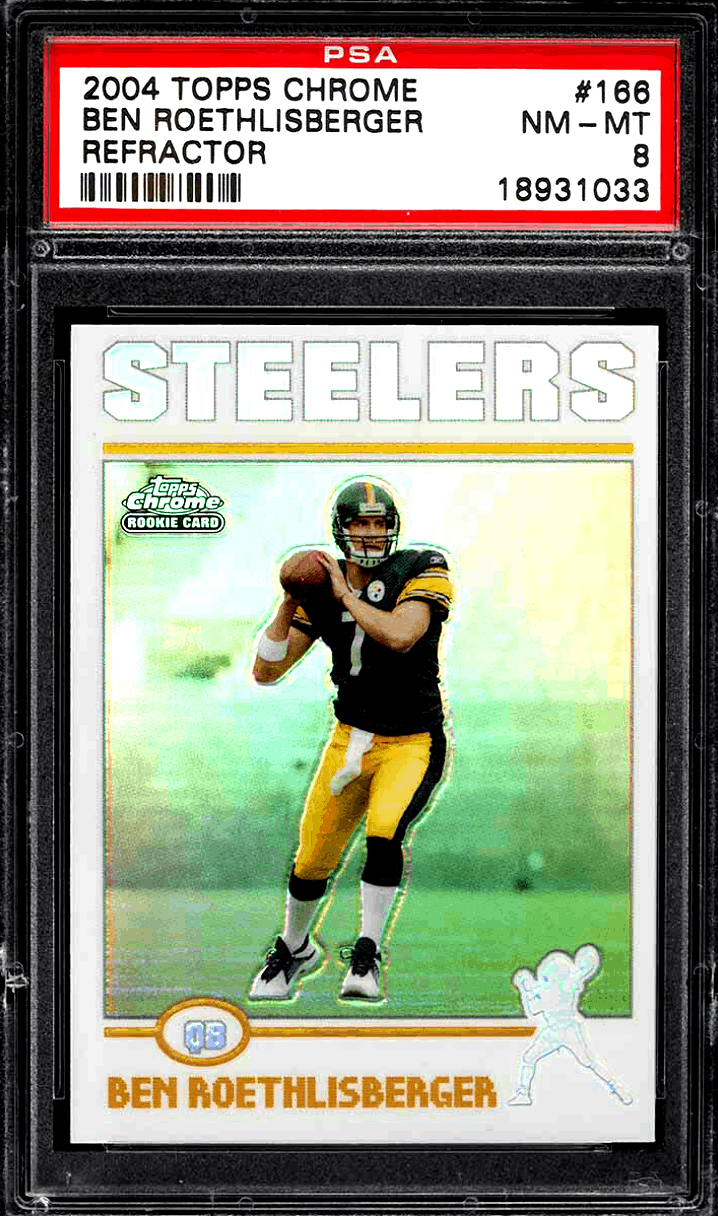 Roethlisberger is one of the key rookies in the 2004 Topps Chrome set, and his card is nowhere near as expensive as the first two on the list. The base is plentiful, but gem mint versions still command a good price.

Must Read: 5 Rookie Cards that could Double in Value!

The card features a strong design, with a large team name at the top of the card, and an action shot of the player preparing to throw a football. It’s also layered, which helps to make Roethlisberger stand out from the background. With a chromium finish and a trio of parallels, it’s worth checking out if you’re on the lookout for a budget option. 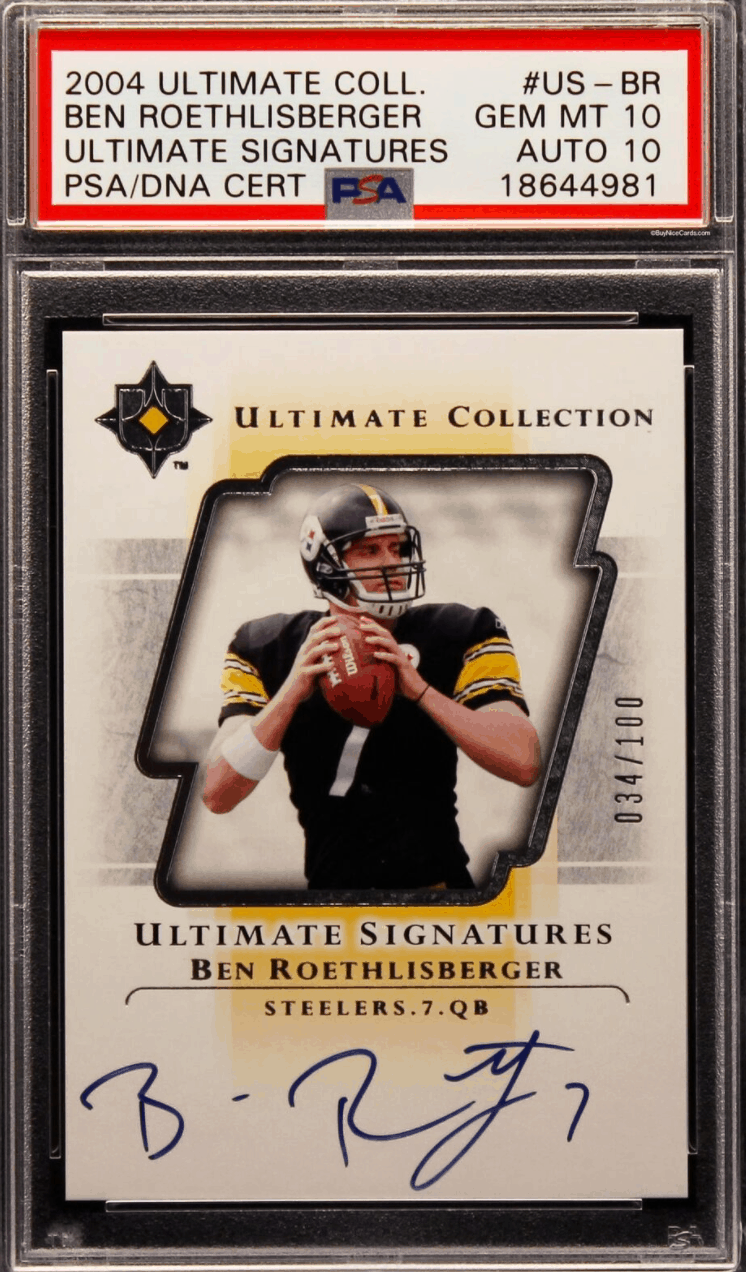 The most valuable Ben Roethlisberger rookie card is the 2004 SP Authentic Autographed Jersey #213.

If you are looking for the best bang for your buck consider the Topps Chrome Roethlisberger rookie card.

Please email us at value@goldcardauctions.com if you would like an estimated value of your Roethlisberger rookie card… include a minimum of 2 photos… thanks!

Despite his advancing years, Roethlisberger has made it clear on multiple occasions that retirement is far from his mind right now. This was after suffering a season-ending elbow injury in 2019, which comes with months of rehab, and the chance of inflicting further damage in the long run.

He’s clearly in it for the love of the sport, while he’s still highly effective from the QB position. One final push for a Super Bowl appearance would only serve to bump up the prices of his RCs even further, while he’s sure to get a spot in the Hall of Fame when he does decide to call it a day.

If you’re thinking of investing, now is likely to be the best time, especially before he hangs up his helmet for good. The average price of his rookie cards is beginning to creep upwards, and there’s no sign that it’ll stop anytime soon.