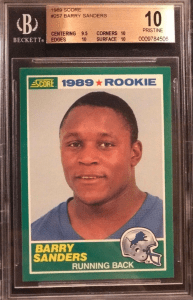 Barry Sanders (07/16/68) is a former Detroit Lions running back who played in the Pro Bowl for each of his ten NFL seasons. Named as the Rookie of the Year in 1989, he dominated over the next decade and ended as the MVP in 1997.

Known for his elusiveness, Sanders still holds a number of records, including the most rushing touchdowns in a season. However, he played in an era that saw an explosion in terms of the sheer number of cards on offer, making it hard to tell which ones are worth anything.

As you’ll see below, rarity and condition are the key combinations if you’re looking for the most expensive options. We’ve listed five of his most valuable cards, along with average prices and why they happen to cost so much.

The first on our list is a shiny card with a silver background. Sanders is sprinting in the image, clutching a football as he does his thing. The reverse is a pink and purple combo with a bordered reverse image of the player. You’ll find his 1996 stats at the bottom, along with NFL totals.

One of the more popular collections of the late 1990’s, the 1998 Leaf Rookies and Stars Football Crusade comes with three sets. The Green cards are numbered to 250, there are 100 Purple versions, and just 25 Red cards.

It’s an understated option compared to many of the others on this list, and it’s shiny, rather than gaudy. The front has an image of Sanders evading tackles, while the back notes that he’s only the third rusher in league history to top 2,000 yards in a season. An ungraded version sold for $1,536 late in 2019, so it’s another high-end card to look out for.

Whether it was drugs, or too much artistic control, you’re unlikely to forget the design of this exciting card! Sanders is in full sprint, and you can see the determination etched into his eyes. The background is green, with a blue wave behind the player. His name is displayed in gold, with shadows below the letters. The reverse has the same motif, using the outline of the player and the wave to show Sanders’ basic stats and NFL totals.

A BGS 9.5 recently sold for $1,913, so it’ll take a lot of money to add one to your collection. There are only 61 copies in existence, although that’s plentiful compared to the next card on our list.

The Finite Spectrum Barry Sanders is a One-of-One card, with a close-up image of the player next to a smaller full-length picture. The reverse has a great image of him evading capture, along with his ‘97 stats and career totals.

It would be valuable even if there were other copies available. It earned a BGS 8.5 rating, as it’s slightly let down by a few scuffs on the corners. However, the card still went for $1,957 at auction recently, mostly because of its unique nature and strong designs.

One-of-One cards are often a dangerous investment, but it could go for far more when it’s next put up for sale.

Limited to just 50 copies, this is another example of the extravagant designs of the late 1990s. It’s a landscape card, with Sanders to the left in his uniform, next to an illustration of a lion with a jungle background. The reverse is also great, with a Fresh Prince color scheme to go with his impressive NFL totals.

It’s another interesting card, but it’s difficult to find in decent condition, mostly because of the limited print run. An 8.5 sold for $4,349 at a PWCC auction in November 2019, while there’s only one version graded higher.

A 1998 Skybox Metal Universe Sanders card is worth a serious chunk of change, and it’s the most expensive Sanders card to sell in recent months.