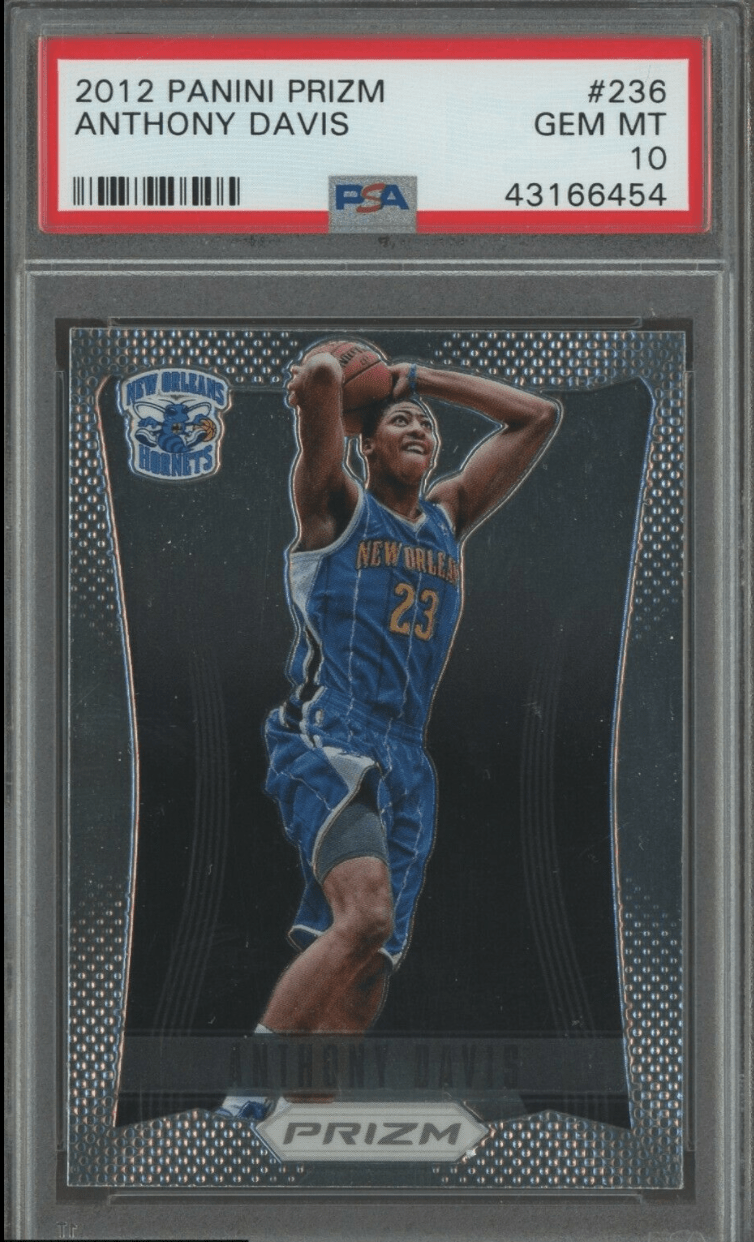 Anthony Davis (03/11/93) is a power forward/center who currently plays for the Los Angeles Lakers. The No.1 pick in the 2012 NBA Draft, Davis is a seven-time All-Star who also won gold with Team USA at the London Olympics.

Here’s everything you need to know about his extensive list of rookie cards, including a full checklist, the best three options, and an investment outlook for the next few years.

Here are three of the best Anthony Davis rookie card options to look out for according to recent action data. 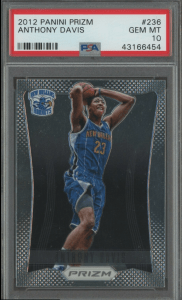 A premium pick with lots of choice on offer, the Panini Prizm set has a range of parallel versions available, as well as autographed editions. They’re always popular with collectors, thanks to a distinctive design and an action shot showing Davis ready to dunk. In terms of pricing, a PSA 10 (read PSA or BGS) graded base version recently went for $484.99 at auction. The quote on the back notes;

“It was quite a year for the former Kentucky star. After winning an NCAA title and becoming the No.1 overall selection (read Best LeBron James Rookie Cards) in the 2012 NBA Draft, Davis helped Team USA take home the gold in the 2012 London Games. The 19-year-old made history, becoming the youngest gold medalist in USA Baseball history”. 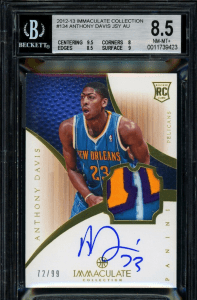 The Panini Immaculate has several different image variations and includes both horizontal and vertical designs. The base is limited to just 99 copies, with the combination of an on-card signature and a player patch making it an exciting prospect for collectors. For example, an ungraded version recently drew 77 bids and a fee of $1,591.66. The quote on the reverse reads;

“Scored 21 points and grabbed seven rebounds against San Antonio in his NBA debut on Oct. 31, 2012… Attended Perspectives Charter High School in Chicago… Posted his first double-double as a pro with 23 points and 11 rebounds in a win at Charlotte on Nov. 9, 2012… No.1 pick in 2012 NBA Draft.” 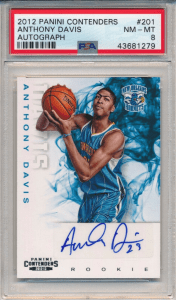 Another stunning option with a distinctive design, the 2012 Panini Contenders has a signature on the bottom, although it’s not serial numbered. A PSA 10 sold for $416.30 after attracting 61 bids, so it’s comparable to the base Prizm card in terms of price and popularity. The quote reads;

“The Hornets have drafted two No. 1 picks in franchise history. They took Larry Johnson first in 1991, and he was the NBA Rookie of the Year. Davis was the top choice in 2012, and New Orleans hopes he can claim that award, too. He started strong with 21 points and seven rebounds in his debut vs. the Spurs’.

Davis looked likely to be on his way to a 2020 NBA championship win with the Los Angeles Lakers before it was unceremoniously suspended. He still has a player option for the 2020-21 season, but he could end up being a free agent by the time it starts up again if rumors are to be believed.

It’s reported that Davis turned down a four-year, $146 million extension offer from Los Angeles in January, so much depends on where he ends up when the action is restarted.

Regardless, he’s undoubtedly one of the NBA’s top players (Best Luka Doncic Rookie Card), and it’s reflected in the average price of his rookie options across the board.

No matter where he ends up, Davis is likely to improve any team he signs for. From his trademarked unibrow to his current contract issues, he always makes headlines, but the 2017 NBA All-Star Game MVP is likely to be better off with LeBron James at his side.

With strong performances each year and no sign of slowing down, it seems likely that his rookie card prices will continue to rise each season. They’re already pricey as it is, but they could be an astute investment if you’re willing to wait for a few seasons, or even longer for his inevitable Hall of Fame spot.