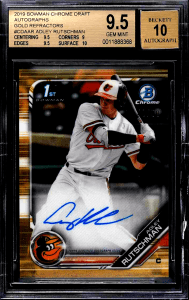 How good is this kid supposed to be? Whelp for starters back in 2019 Baseball America stated, “Adley Rutschman Is The Best MLB Draft Prospect Since Bryce Harper“.

On top of that MLB.com has him ranked as their 4th overall prospect behind only Wander Franco, Gavin Lux, and Luis Robert… those are some great names to be behind.

He won the Golden Spikes and Dick Howser Award after smacking 17 homers and batting over .400 in 2019.

Rutschman can hit from both sides of the plate, makes excellent contact, and is being called the best offensive catching prospect since Joe Mauer back in 2001.

Now that you have a good idea what this kid is all about let’s check out our top-rated Adley Rutschman rookie cards to date for investment purposes… please note this list will update as better cards are released. 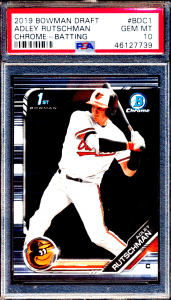 Our top-rated Rutschman rookie card to date is the 2019 Bowman Draft. 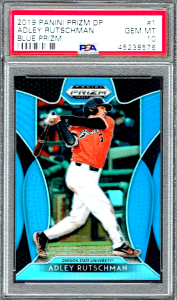 Panini Prizm is making a decent effort to enter the baseball collecting arena with this Adley Rutschman rookie card.

Numbered #1 the card shows Rutschman slapping the ball down the third baseline for what we’re assuming is a stand up double.

The only problem with Prizm baseball cards is they don’t have an exclusive contract with the MLB (i.e. Topps) and cannot display the team logo on the front of the card. 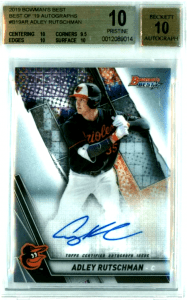 Not a bad card by any means but if we’re going to buy a Rutschman Bowman rookie card it’s going to be the Bowman Draft, not the Bowman Best pictured above.

By far the most valuable Rutschman rookie card is his 2019 Bowman Draft as a high-end parallel can reach well into the 4 digits. 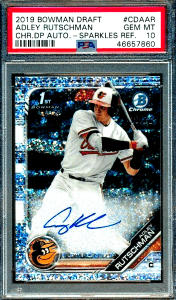 Adley Rutschman appears to have the talent to be an All-Star in the league for many years to come… but so did Byron Buxton.

We feel Wander Franco and Luis Robert are the best current prospects and are the ones who were somewhat heavily invested in… does that mean Rutschman is out… no… but tread lightly.