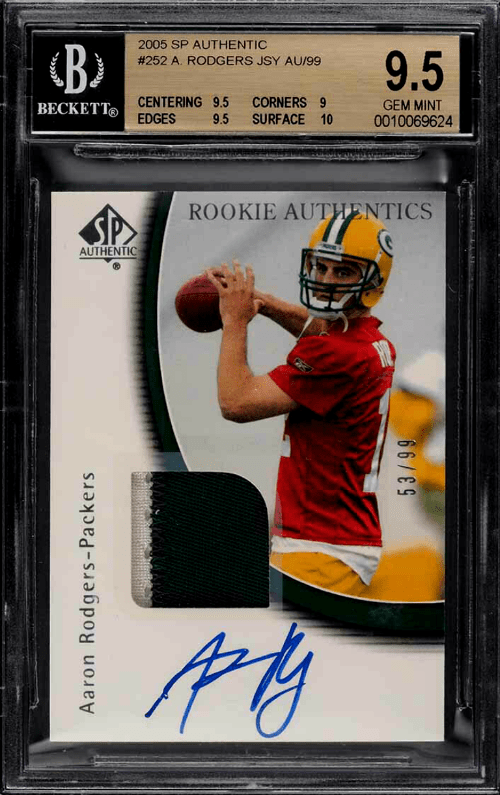 Aaron Rodgers (12/2/83) is a quarterback who currently plays for the Green Bay Packers. He was a first-round NFL Draft pick for the team in 2005, and he’s won it all during an illustrious career with one of the most decorated teams in recent history.

Rodgers is seen as one of the greatest QBs of all time. He’s the all-time regular-season career passer rating leader, with incredible consistency at the top of the game since replacing Brett Favre.

His success has led to an influx of bids on various rookie cards, but are they worth the considerable outlay?

We’ve got a round-up of three of the best rookie cards on the market, as well as an investment report for the foreseeable future. 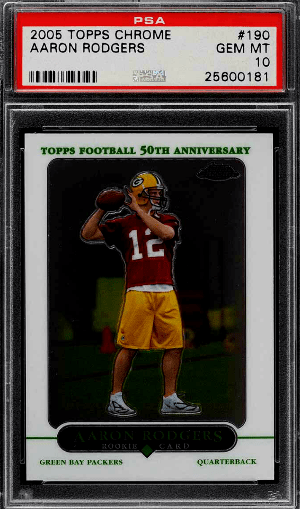 One of the most popular Rodgers rookie cards and widely available on eBay at any time.

Numbered #109 the card shows Aaron in his yellow warm-up shorts and red can’t hit me jersey with the words “Topps Football 50th Anniversary” transcribed across the top of the card.

A good looking card and a great long-term investment. 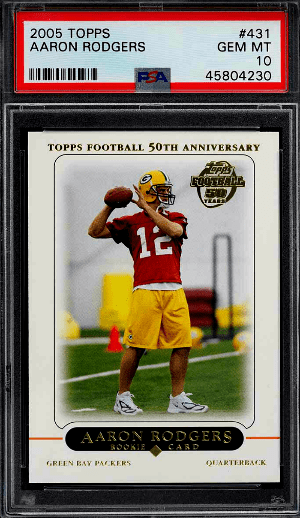 Similar to the Topps Chrome card above just at a lower cost point.

A great starter Aaron Rodgers rookie card for kids or collectors not looking to spend a ton of money. 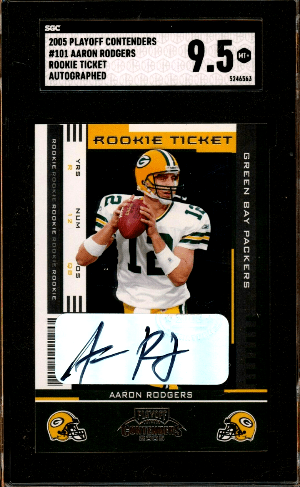 The front of this popular card shows Rodgers as he’s about to throw a football, with the signature located at the bottom. The reverse lists his basic collegiate stats, with a massive Packers logo in the middle. It comes in a deep matte black, making the image striking.

A mint-condition version of this rookie card will set you back by roughly $11,000, so it’s one of the most expensive on the market. However, there are a number of reasons why it’s so widely sought after. It’s seen as the best of the Rodgers rookie cards, and it’s arguably underpriced compared to the likes of Tom Brady.

The price is enough to put off many investors, but it’s a signed card that is incredibly popular with potential collectors. It’s also quite easy to find on the market, with 530 copies made during the initial print run. 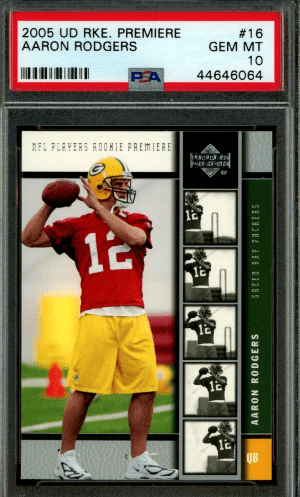 Another great option if you’re looking for a Rodgers card with decent value, and are not looking to spend a boatload of cash.

It’s ideal as a mid-tier investment and could shoot up further following Rodgers eventual retirement.

As with many of Rodgers’ RCs, this is a high-value item that will go for upwards of $10,000. It comes with a patch from a jersey worn by the player during his rookie days, and it’s also signed.

The front of the card is pretty understated, with a white background and the image located at the top. The green, white, and yellow patch is found directly in the middle, and the signature is located on a white section at the bottom. The back has a typical blurb explaining that the card was signed and sent to Upper Deck by the player himself.

A perfect version is where the big bucks are, and there are only 99 copies in the world. Prices should continue to rise once Rodgers makes it to the HOF, and there’s always solid interest in rookie patches for well-known players. 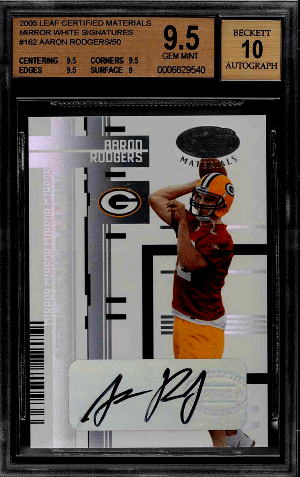 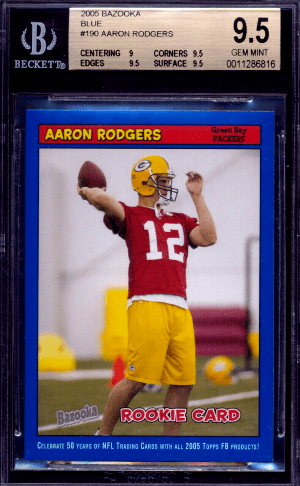 Rodgers RC values could be somewhat volatile over the next few years with the average trend moving upwards.

The value of his rookie cards will depend on how he plays out the twilight of his career… will he have another deep playoff run? how long will he play for? and then of course his eventual introductory into the Pro Football HOF.

If you would like an estimated value of one of your Aaron Rodgers football cards please email us at value@goldcardauctions.com (include at minimum 2 photos of the card in question).

Maximizing the remaining time he has left on the field is going to be difficult, as injuries are finally beginning to take their toll on the Packers QB. Rodgers still has a few seasons left at the top, and any additional trinkets will likely add to the total value of his cards over the next few years.

We’ve discussed three high-value options, but there’s still a decent market in the mid-range. Many won’t be signed, and they might lack the small print run of his autographed jersey, but there’s still potential for increased returns on any investment.

The amount of cards on the market has increased rapidly since October 2018, which lead to an overall decline in average prices. Any potential returns would likely be seen upon Rodgers’ eventual retirement, as well as entry into the Hall of Fame.