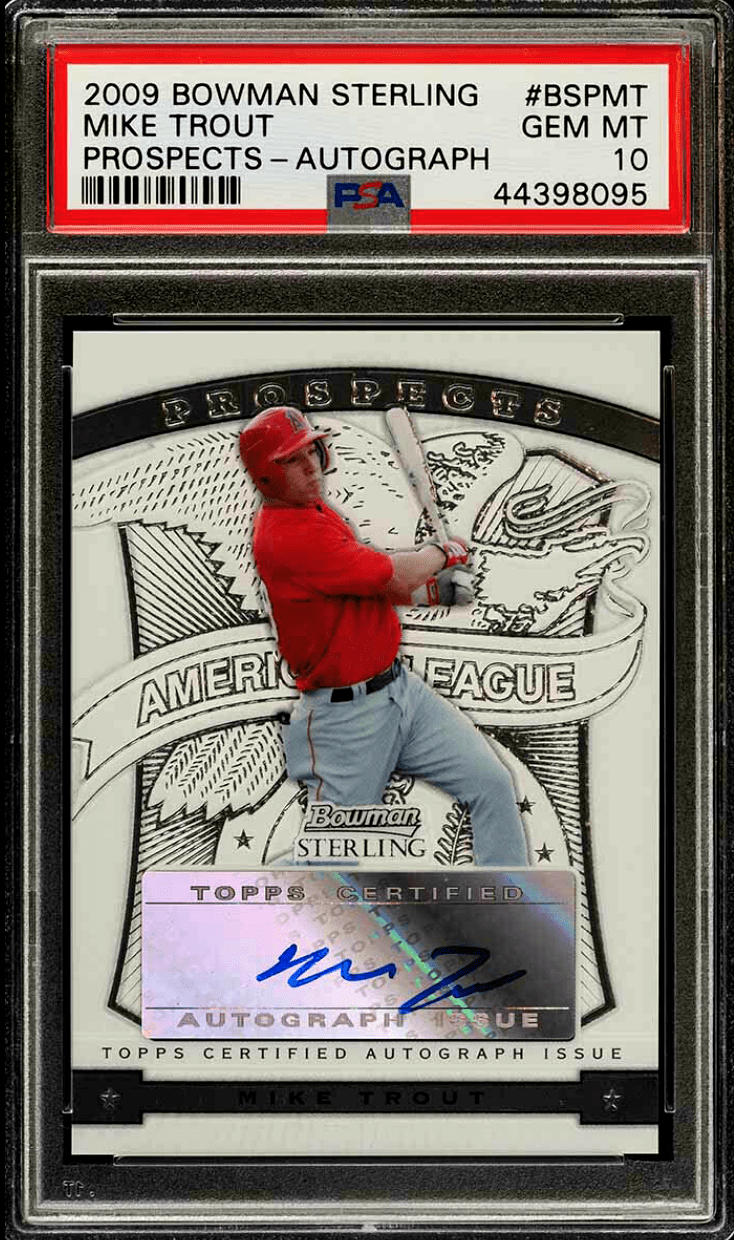 Mike Trout is the best player in baseball and 3-time MLB MVP. He has risen to the upper echelon of the investment hobby, yet still, some of his cards are not getting the attention they deserve.

Trout was drafted by the Los Angeles Angels with the 25th overall pick in the 2009 MLB Draft. Some other names of note in the 1st round of that draft included Stephen Strasburg (drafted 1st overall), Mike Minor, and AJ Pollock (clearly, this was not the best first round of baseball drafts we have seen).

Trout quickly adapted to the league upon call up on 4/28/2012. He was again brought up from the minors, this time to replace Bobby Abreu (who was batting .208 at the time). He went on to win the 2012 Rookie of the Year and smacked 30 homers.

We are here to uncover 5 Mike Trout baseball cards that have been somewhat overlooked by the general public.

So without further delay, let’s check these bad boys out! 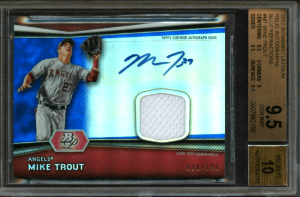 The 2012 Mike Trout Bowman Platinum baseball card has EVERYTHING you want in a super high-end baseball card and the only thing holding it back from being worth well into the 5 digits is one year.

Numbered #AR-MT the card has a rich red, white, and blue patriotic color scheme and the reverse reads “In Baltimore on July 24, 2011. Mike was the third teenager ever to homer for the Angeles, joining Ed Kirkpatrick (1963-64) and Aurelio Rodriguez (’67)”. 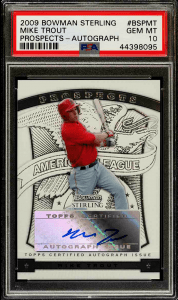 This card is loaded for bear…

Everyone knows about the 2011 Topps Update, 2011 & 2009 Bowman Chrome, etc. The 2009 Trout Bowman Sterling Prospect card seems to take a backseat when it comes to the top Mike Trout rookie cards discussion even though it is one of the best looking of ALL the Trout baseball cards.

We love, LOVE the American League Logo sketching in the backdrop to go along with a solid autograph on silver, and then classic Trout base knock aftermath swing… the card oozes eye candy and is a true masterpiece in every sense of the word.

Numbered #BSPMT the back of the card reads “Mike’s extensive experience on travel teams helped eased his transition to the professional level. He developed a friendship with top prospect Randal Grichuk long before the two became back-to-back Angels picks in the 2009 MLB Draft, so they roomed together in the Arizona League. Trout debuted by hitting .360 – the second-highest level in the circuit”. 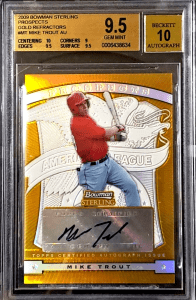 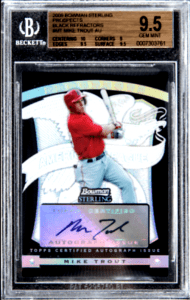 We would love to get our mitts on the Red Parallel but have never seen it much less had an opportunity to buy it… that one is definitely on our white whale list (also, if someone has an image of the red parallel please post it in the comments! Thanks, bruh!). 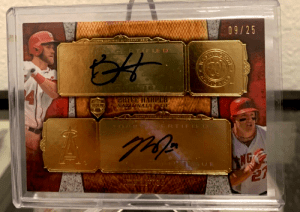 Mike Trout and Bryce Harper on the same card is like having Tupac and Biggie at the same party… super rare. This card is so uncommon we couldn’t find a picture of the card graded (read PSA vs BGS vs SGC before you get your cards graded).

We love this card’s color scheme (gold and burnt orange look gorgeous together). The autographs on a beautiful gold plate really make this card pop!

We actually bought this card a few months ago and are waiting to get it back from Beckett Grading – we will post a picture of the card via the Gold Card Auctions Instagram page once received. 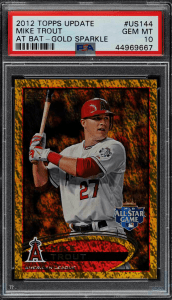 When we initially had the idea to write about underrated Mike Trout cards this wasn’t even on our list and honestly, we had never seen the card before… but boy are we aware of it now! (read later: Top Rated Juan Soto Rookie Cards)

The 2012 Topps Update Gold Sparkle Mike Trout card is a beaut, Clark! The card features a gorgeous gold color scheme with shades of black mixed in at the exact right amount.

Numbered #US144 the reverse of the card reads “Three months after opening the season as the youngest player in the Triple-A Pacific-Coast League, Trout was a member of the AL All-Star Team – and a certified phenom. He was the first player inited to the affair before his 21st birthday since Alex Rodriguez in 1996, and the third youngest to record a hit (a single) in the mid-summer classic“.

We do not have this card in our investment portfolio but that may change after this weekend. 🙂 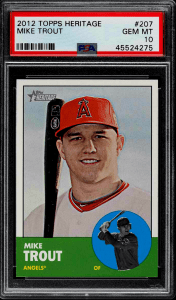 Here is a great mid-level price range Mike Trout card that almost all collectors should be able to afford (even at high grades).

The 2012 Mike Trout Topps Heritage baseball card is numbered #27 and shows a close up of Trout with that million-dollar smile and the bat slumped over his shoulder (ala 1989 Ken Griffey Jr. Upper Deck).

A green, blue, white color scheme… the reverse reads “In Mike, the Angels have what many regards as the top prospect in the league. In 2011 both Baseball America and Sporting News named him the minor league player of the year“.

Again, we do not own this card but are keeping a sharp eye out for an auctions that meet our price target.

And there y’all have it!

What do you think of the list? Did we leave any off? Did we foolishly add one that shouldn’t have been on the list?

Don’t hesitate to let us know via comments below or hit us up on the Gold Card Auctions Facebook Page!